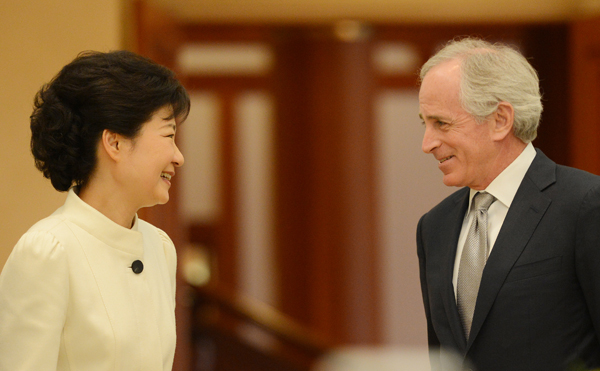 President Park Geun-hye yesterday said South Korea should be allowed wider powers in its peaceful use of nuclear power as a result of talks to revise a 1974 pact on the use of atomic energy.

The agreement for cooperation between Seoul and Washington concerning civil use of atomic energy is due to expire next March and Korea has pushed the United States to lift its longtime bans on the reprocessing of spent fuel.

Park yesterday met with U.S. Senator Bob Corker, R-Tenn, a ranking member of the Senate Committee on Foreign Relations, and related her stance on the renegotiation of the decades-old ban.

“President Park asked for the U.S. Congress’s support in revising the agreement in a more advanced manner so that peaceful use of atomic energy in Korea can be expanded,” Kim Haing, Blue House spokeswoman, said yesterday. “Senator Corker replied that he understands the importance of nuclear energy in Korea and that he expects that the two sides can produce a mutually beneficial outcome.”

The remarks came ahead of Park’s summit with U.S. President Barack Obama in May. Speculation is high in local media that the nuclear agreement renegotiation will be one of the topics at the summit.