When MB botched a meeting with Kim Jong-il

When MB botched a meeting with Kim Jong-il 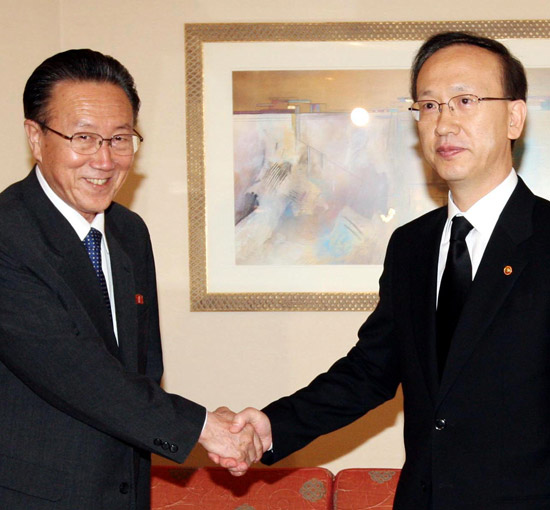 One of the opportunities that former president Lee Myung-bak missed to improve inter-Korean relations was a botched negotiation for his first summit with North Korean leader Kim Jong-il.

At around 9:00 p.m., on Oct. 17, 2009, Yim Tae-hee, then-Labor Minister under the Lee administration, had a secret meeting with Kim Yang-kon, a department director of the Central Committee of the Workers’ Party of North Korea, at the St. Regis Singapore Hotel in Singapore City.

Yim was a special envoy of President Lee, and the purpose of the meeting was to discuss six topics regarding the third inter-Korean summit.

A former senior Blue House official who also attended the meeting told the JoongAng Ilbo that both sides reached a decision to discuss some remarkable issues at a third summit, which was to be between President Lee and then-leader Kim Jong-il, including repatriation of some South Korean POWs taken during the 1950-53 Korean War.

“At the time, the North Korean side showed a positive attitude in discussing its nuclear weapons program, which they had refused to talk about previously,” the official said. “So both sides reached an agreement that they would make more progress on that issue at an upcoming third summit than the accomplishments made at the former six-party talks.

“One of the possible topics for a third summit was repatriation of the South Korean POWs, who numbered less than 10,” the official continued. “The negotiation was not like money-for-talk, [where the South gives money to have a dialogue with the North, as in the past]. We agreed to support the North step-by-step, in response to their actions, which was different from the first and second summits [by former the administrations].”

However, the negotiation was finally scrapped. Right before Envoy Yim was about to sign the agreement for the talk, the South Korean government ordered him to stall for time and earn more bargaining leverage.

“Before making the final agreement in Singapore, Yim returned to Seoul and gave a briefing on the negotiation to the president and his core aides,” another government official who was aware of the situation at the time, said. “However, some of the president’s hawkish aides told the president to take more time before the final negotiation.

“They argue it would be advantageous for the South, because the North was at risk of dire starvation,” the official said. “And the president accepted it.”

Finally, Yim followed the order, but he persuaded his North Korean counterpart, Kim, to have additional discussions before the final agreement. They had two more meetings in Kaesong city, on Nov. 7 and 14, respectively, but the negotiation for the third summit finally failed.

Yim also confirmed that was true in an interview with weekly magazine Shindonga.

“Then-Unification Minister Hyun In-taek told me to ‘raise the number of POWs [released to the South] up to 20,’?” Yim said. “The Unification Ministry wanted more, but the North already thought the negotiation had failed.”

However, Chun Yung-woo, then-presidential secretary for foreign affairs and national security, said that allegation is not true. He said the cause for the failed negotiation was Pyongyang demanded too much money in exchange for the summit.

Some critics say that the Lee administration missed a good opportunity to improve inter-Korean relations, because they adhered to differentiating their policies from those of the former administrations.

Another criticism over the Lee administration’s strategy is that Lee considered the North Korean regime beneath the South administration. In this sense, Lee decided not to offer any assistance to the North unless the North begged for it first.

“North Korea thought they made concessions in the negotiation, but the South demanded more, which upset them,” Moon Chung-in, a politics professor at Yonsei University, said. “So they decided to become a nuclear-armed country, so that they wouldn’t be less powerful than the South.”

When late leader Kim Jong-il collapsed from a stroke in August 2008, the Lee administration thought the North would beg for aid soon, sources said.

At the time, a senior Blue House official told Lee that “the North would kneel down in front of us if we don’t provide food for them for about a year.” But that prediction was wrong.