Ryu setting his sights on being Rookie of the Year

Ryu setting his sights on being Rookie of the Year 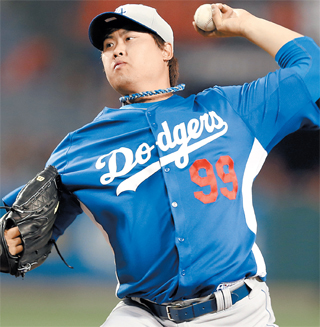 The Los Angeles Dodgers’ Ryu Hyun-jin set 12 to 13 victories as his debut season goal after wrapping up his preseason on a positive note.

Speaking to reporters on Saturday Korean time, a day after he pitched a perfect four innings against the Los Angeles Angels of Anaheim, the pitcher said that number will be enough for him to realize his goal of becoming the National League Rookie of the Year.

At his final preseason appearance at Angel Stadium in Anaheim on Friday, Ryu kept any Angels player from reaching a base in the first four innings. He pitched 47 balls, 33 of them strikes. He struck out four.

The performance has lowered his ERA to 3.29, the best in the Dodgers rotation. He had two victories and two losses from seven outings, including six starts. He allowed only one homer over 27 1/3 innings.

“My condition has gotten better through the exhibition games,” said Ryu, who gave up two runs over two innings in his preseason debut as a starter against the Angels on March 1. Including the 12 players he faced on Friday, Ryu retired 23 players in a row.

“I pitched 98 balls, took four days off and pitched four innings again. There was no problem,” Ryu said, referring to his previous game. He took his second victory against the Chicago White Sox on Monday, allowing two runs over seven innings.

He said he was satisfied with the preseason performance overall, adding that the Dodgers’ coaching staff and his teammates complimented his pitching against the Angels. He had his 26th birthday last Monday, and got news later that week that he will be the Dodgers’ second-game starter in the season.

Ryu will make his season debut on Wednesday when the Los Angeles Dodgers play against the San Francisco Giants, the defending champions.

He said he’s been watching videos of the Giants’ previous games, analyzing how their batters face off against pitchers.

“We’re facing off with little knowledge of each other. I don’t know them well, but they don’t know me, either,” Ryu said.

Ryu, who struck out 27 in the preseason, said he will eye the best rookie award as a way of contributing to the team, but a strikeout title is not on his mind. He said he sees others strike out more than him.

He said he realized through his preseason outings that Major League batters are more powerful than Koreans, but that the difference ends there.

Meanwhile, he came in fourth in an ESPN poll on potential candidates for the 2013 National League Rookie of the Year award. In its survey of 41 baseball experts on Saturday, Ryu received four votes, along with Shelby Miller, a St. Louis Cardinals pitcher.