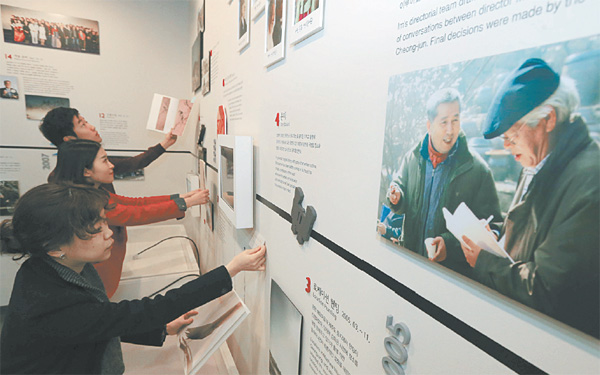 Visitors learn about the career of Im Kwon-taek at a newly opened museum dedicated to the director in Busan. [JoongAng Ilbo]

Director Im Kwon-taek, a pioneer in the Korean film industry, now has a museum dedicated to his life’s work at Dongseo University Centum City Campus in Busan. This is the first time in Korea that a single gallery has been built to commemorate a film director currently in the field.

As visitors enter the museum, they can see all of Im’s movie titles on the left wall at one glance. Under the theme “A Wandering Life,” the exhibits then introduce the 77-year-old director’s life in chronological order.

The first room shows Im’s private life before his directorial debut with “Farewell to the Duman River” in 1962. A photo of Im and his mother is the most appealing piece in the room.

“All the images of females in Im’s movies originate from his mother,” said Kim Jung-seon, a professor at Dongseo Universty’s Im Kwon Taek Film Archive.

The second section presents his works until 1975. Influenced by Hollywood and Hong Kong movies, he experimented with various genres including action, melodrama, horror, historical drama and comedy at that time.

The next category shows films from the late 1970s to the 1980s. During this period, Im began to develop a more unique identity as a director. “Weeds” (1973) and “The Family Pedigree” (1978) exemplify this shift. Visitors can also listen to about 20 soundtracks used in his films.

Im grew even more famous throughout the 1990s. The room focused on that era shows a model of Woomi-kwan, a Japanese-built theater demolished in 1950 that was the main backdrop for “The General’s Son” (1990). Videos in this also offer commentary by other famous directors such as Park Chan-wook.

A set used for “Chihwaseon” (2002) is also among the pieces on display at the museum.

“Seopyeonje” (1993) is the inspiration for a special display that concludes the exhibits.

In total, Im has directed 101 movies over his 50-year career. He was born in Gwangju on May 2, 1936 and began his film career as a production assistant in Seoul in the mid-1950s.

With his movies’ distinctively Korean settings and themes, Im has won almost every major domestic film award. He also boasts a number of accolades from international events like the Cannes and Berlin film festivals.