Rekindling interest in the traditional with a touch of flair

Rekindling interest in the traditional with a touch of flair

Some people may find traditional Korean artwork like mother-of-pearl, knots and woodwork rather boring.

But with just some minimal design elements added, they can be reborn as one-of-a-kind pieces of furniture and accessories in which both traditional and contemporary coexist.

Great examples of such works are on display at the “Craft Masters Today - Seoul Living Treasure’s Exhibition” currently underway at the Nam Seoul Annex Building of the Seoul Museum of Art in Gwanak District, southern Seoul. Here, visitors can rekindle their interest in traditional Korean crafts.

A total of 23 Intangible Cultural Heritages of Seoul - a status given to artisans who keep traditional skills alive - are displaying some 200 works in collaboration with modern art professors and designers.

In fact, many of the pieces look like they would blend in well in today’s living rooms and bedrooms.

Another chest by Jeong Myeong-chae, a mother-of-pearl artisan and Intangible Cultural Heritage of Seoul No. 14, is a tad more decorative with butterfly-shaped metal pieces, yet its colors and decorations are subtle and its construction well-balanced. 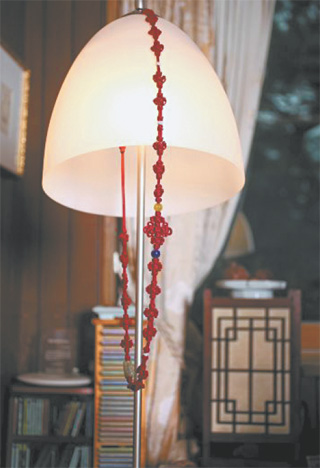 A modern yet traditional lamp by Kim Eun-yeong, a knot artisan designated as an intangible cultural heritage. Provided by the museum

Also interesting is the work by Sim Yong-sik, Seoul’s Intangible Cultural Heritage No. 26 whose area of specialty is small-scale woodwork known in Korean as somok (small wood). He created a lamp table that looks like a modern piece of furniture. The face of what seems to be a beast on the side is the only hint of tradition.

The lamp with a white shade and steel base is also something you could easily pick up at Ikea except that it’s decorated with a string of traditional knots made by Kim Eun-yeong, Seoul’s Intangible Cultural Heritage No. 13.

“In Europe, the works of traditional masters have long been deemed masterpieces and the top-quality, luxury items,” Kim said. “This should also be the case in Korea.”

Not all pieces have modern touches though. The folk art, musical instruments and bows are all-out traditional. Their detailed and glamorous decorations of gold leaf, butterfly patterns and traditional knots are quite overwhelming on their own.

Many people are not familiar with the venue: the Nam Seoul Annex Building of the Seoul Museum of Art.

It opened near Sadang Station on line 2 in 2004, and it’s true that it’s an odd location for an art museum to set up shop. Yet the building is quite remarkable, which is probably why the Seoul Metropolitan Government chose the site.

The 19th-century building with granite and red stone looks storied even at a glance. It used to be the legation of Belgium and is designated as Korea’s Historic Site No. 254.

Seoul Museum of Art - in the Seosomun area and close to Deoksu Palace in downtown Seoul - has decided to give more clear identities to branches. In addition to Nam Seoul (southern Seoul), the Buk Seoul (northern Seoul) branch is slated to open in July in Nowon District.

While the former will be the so-called “Living Arts Museum,” dedicated to craftwork, design, fashion and architecture, the latter will focus more on public art.

“Craft Masters Today” is the first exhibition at the Nam Seoul Annex Building of the Seoul Museum of Art since officials decided on the new identities for the branches.

The museum is close to exit No. 1 of Sadang Station, line 2 or exit No. 4 of the same station on line 4.