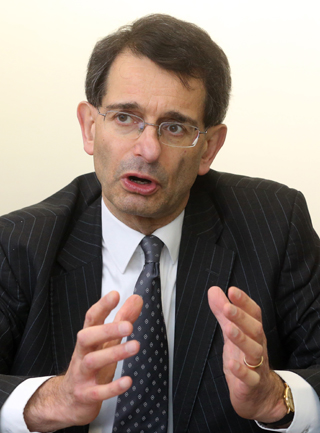 Colin Mayer, professor of Finance at Oxford University’s Said Business School, credits Korean conglomerates’ for the country’s economic growth in the past, but suggests a better corporate governance model can be considered for their future growth.

“While family ownership has contributed immensely to the success of Korea in the past, there is a case for considering how it should adapt in the future,” Mayer said in a recent interview with the Korea JoongAng Daily.

“Long-run ownership does not necessarily have to be in the hands of families,” he said.

He suggested that family ownership could be handed over to trusts, private pension funds and foundations that ensure long-term investors.

The 60-year-old British professor visited Seoul in mid-March to deliver lectures at Seoul National University, Yonsei University, Chung-Ang University and Posco Research Institute about why corporations fail and solutions to their problems based on his newly published book “Firm Commitment.”

In the book, Mayer writes that the corporation is the most important institution in our lives - its clothes, feeds and houses us - but the modern corporation has lost its purpose and become dominated by short-term financial concerns to the exclusion of others and to the detriment of customers, employees and communities.

The book discusses why corporate failures have become worse recently and what should be done to address the issue. It sets out a practical agenda for reform of the corporation.

Q. What do you recommend for Korean companies to improve their corporate governance structure?

A. In addition to reforms of ownership it is important that large corporations have clearly articulated purposes and values that go beyond those of the owners. To what extent does the corporation reflect the interests of its customers, its employees, its suppliers and its customers? How does it precisely reflect these interests? Critically, someone has to be responsible for upholding those values and to take responsibility for when the corporation fails to fulfil them.

These features of alternative long-term owners, clearly articulated values and truly independent boards responsible for these values will help to address the concerns that have arisen in relation to the chaebols. These relate to four sets of issues: Their monopoly position in regard to their customers, the treatment of minority investors in relation to the dominant shareholders, the allocation of financial resources in the economy and the extent to which resources are available for new start-ups and entrepreneurial firms, and the relation between the firms and the state.

The chaebol played a vital role in the development of the Korean economy. The ability to call on a small number of individuals who could develop corporations was critical to the emergence of Korea as an industrialized nation.

As part of that process of creating corporations with critical scales of operations, conferring monopoly rights on their operations was an important component. Now, with the success of the chaebol and the Korean economy, that right has become a responsibility to give back to Korean society in ensuring that, for example, the monopolies are not abused but are put to the broader benefit of Korea, including the customers of the chaebol.

Strengthening a competition policy [anti-trust regulation], minority investor protection [such as the disclosure of information to minority investors], the separation between financial and non-financial companies and the transparency of public procurement programmes are important parts of that process.

However, regulation is not sufficient. Corporations need to take responsibility for their own conduct and commit to uphold the interests of society themselves.

Why do you think ownership by pension funds is desirable?

In principle, pension funds are well suited to provide long-term ownership of corporations. They have long-term liabilities to their pensioners and they therefore seek appropriate long-term investments.

There are however two key components to this. First, they need to be able to demonstrate that they are committed to long-term investments in the companies in which they invest, which involves forgoing the right to trade their shares.

Second, they need to be independent of both the companies in which they invest [i.e. not the pension funds of the firms themselves] and of the state [i.e. not just the National Pension Service]. While the NPS can play a role in corporate governance in Korea it should not be a dominant player. Private overseas pension funds should be encouraged to be long-term investors alongside the NPS to avoid excessive domination by a state owned institution.

What is an appropriate corporate governance model for Korean companies?

A mixture of long-term but not necessarily family ownership, clearly articulated values that are firmly embedded in the fabric of the organization and reflected in its daily practices, and a truly independent board of directors are key components of what I term “trust firms,” corporations that can be trusted. They potentially provide a good model for Korean corporations in the future. But corporations should be able to identify a structure and form of organization that is best suited to their particular activities because what is suited to an entrepreneurial firm is different from an established one and what is suited to a high-tech firm is different from a more traditional manufacturing one. Diversity of corporate form is therefore particularly important.

The CEO of Korean steelmaker Posco’s changes as the government changes. What do you think about this case, and what is your recommendation for the future growth of the company?

President Park Geun-hye’s key policy towards businesses is based on “economic democratization,” which leads to regulations on conglomerates. What do you think about this term?

Economic democratization in the sense of a greater participation of a wider segment of Korean society in the benefits of economic prosperity through greater competition is a desirable policy. Strengthened regulation in some areas is also beneficial. But excessive regulation is detrimental to the operation of an economy and corporations seek ways of avoiding regulation and influencing the setting of regulations.