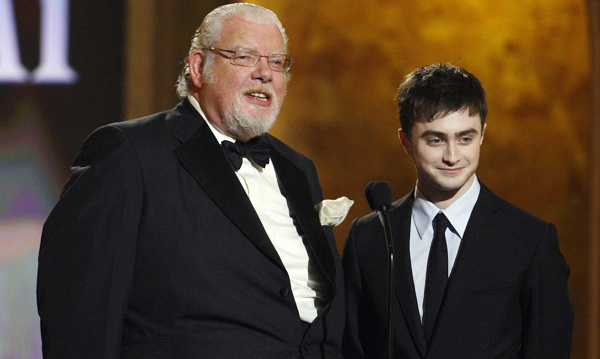 LONDON - Richard Griffiths was one of the great British stage actors of his generation, a heavy man with a light touch, whether in Shakespeare or Neil Simon. But for millions of movie fans, he will always be grumpy Uncle Vernon, the least magical of characters in the fantastical “Harry Potter’’ movies.

“Harry Potter’’ star Daniel Radcliffe paid tribute to the actor Friday, saying “any room he walked into was made twice as funny and twice as clever just by his presence.’’

“I am proud to say I knew him,’’ Radcliffe said.

Griffiths won a Tony Award for “The History Boys’’ and appeared in dozens of movies and TV shows. But he will be most widely remembered as a pair of contrasting uncles - Harry Potter’s Uncle Vernon Dursley and Uncle Monty in cult film “Withnail and I.’’

Griffiths was among a huge roster of British acting talent to appear in the “Harry Potter’’ series of films released between 2001 and 2011.

His role, as the grudging, magic-fearing guardian of orphaned wizard Harry, was small but pivotal. Griffiths once said he liked playing Uncle Vernon “because that gives me a license to be horrible to kids.’’

But Radcliffe recalled Griffiths’ kindness to the young star. “Richard was by my side during two of the most important moments of my career,’’ said Radcliffe, who in 2007 starred with Griffiths in a London and Broadway production of “Equus.’’ AP