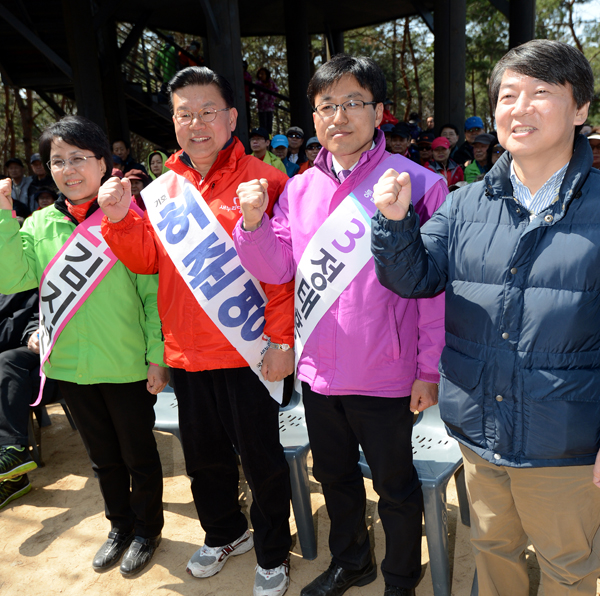 Candidates in the April 24 legislative by-election in Nowon C District attend yesterday at a ritual for the mountain spirit at Mount Bulam in Junggye-dong, Nowon District, northeastern Seoul. From left, Kim Ji-seon of the Progressive Justice Party, Huh Joon-young of the Saenuri Party, Jeong Tae-heung of the Unified Progressive Party and independent Ahn Cheol-soo. [NEWSIS]

When Ahn Cheol-soo, a former independent presidential contender, announced he will run for National Assembly in Nonwon C District in northeastern Seoul in this month’s by-election, some political analysts said it was a pity the potential liberal superstar chose such an easy contest.

But with less than a month befor the election, the race has been nothing like a pushover for the 51-year-old software mogul-turned-politician.

Ahn still has an advantage over his main competitor Huh Joon-young, candidate of the conservative ruling Saenuri Party.

His problem is with his fellow liberals. Two liberal candidates have refused to bow out to give way to Ahn, and a third is also considering running.

According to a Realmeter poll conducted Tuesday, Ahn was only 6 percent ahead of Huh in a race among four candidates, and that lead fell within the margin of error.

In another survey conducted by polling company Jowon C&I on March 23, Huh was leading Ahn in a race among four, although his lead was also within the margin of error.

“It is not an easy fight,” Ahn admitted Saturday. “It is a by-election, and I don’t have a political party, so I am very weak in comparison to other candidates with parties’ backing.”

On Wednesday, Ahn criticized people who called the race a piece of cake for him.

“I knew from the beginning it would be a difficult fight,” he said. “Some are calling it easy in order to undermine the meaning if I win.”

The history of elections in Nowon C District shows the importance of an electoral alliance among the liberals ? rallying behind a single candidate to avoid splitting the liberal vote.

In 2008, Hong Jung-wook of the conservative ruling party won with 43.1 percent against three opposition candidates. In last year’s election, Huh of the Saenuri Party was defeated by Roh Hoe-chan, although he got 40 percent. At the time, Roh was the sole liberal candidate.

Aside from Ahn, two other liberals are running in the April 24 by-election.

Kim Ji-seon, wife of Roh Hoe-chan, the former Progressive Justice Party lawmaker for the district who lost his seat after being convicted of revealing an illegally taped conversation, is running as that party’s candidate. Jeong Tae-heung of the Unified Progressive Party is also running. The main opposition Democratic United Party said it won’t field a candidate, an apparent move to support Ahn, but Lee Dong-sup, head of the DUP’s chapter in Nowon, may run as an independent.

Ahn says he wants to usher in a new form of politics distant from the wheeling and dealing of the past. He has said that the candidate consolidation process is an “artificial” form of politicking.

He had a bad experience of that process before December’s presidential election when he ran as an independent. Negotiations with the DUP’s Moon Jae-in so frustrated him that he left the race in obvious disgust, gave Moon a half-hearted endorsement and went into sullen self-exile in the U.S. for three months.

Aside from the electoral alliance, the most important factor in the race will be voter turnout because the outcome can be determined by dozens of ballots. A higher turnout is generally good for the liberals.

Because the by-election is on a weekday, turnout is expected to be low, and a member of Ahn campaign said it will work hard to encourage turnout.

Because Nowon C is a working-class neighborhood at the northeastern edge of Seoul, its voters’ commutes tend to be long, said Kim Sung-sik, a former lawmaker who headed Ahn’s presidential campaign, in an interview with CBS radio. “Therefore, we are worried that turnout will be low.”

In recent elections, younger voters who cast ballots on their way home after work from 6 to 8 p.m. were believed to have contributed to liberal victories. In a 2011 legislative by-election in Bundang, Gyeonggi, Sohn Hak-kyu of the DUP won and the turnout from 6 to 8 p.m. was 9.1 percent, while the total turnout was 49.1 percent. In the Seoul mayoral by-election last year, 8.7 percent of the 48.6 percent of the voters who cast ballots did so during the final two hours. Liberal Park Won-soon won.

“A by-election tends to have a higher turnout for voters in their 50s and 60s, so a liberal candidate often struggles,” said Bae Jong-chan, a director at Research and Research. “But Nowon C District has a significant population of liberals in their 40s, so the issue is how many of them will actually cast ballots.”

But turnout is expected to rise because of a newly introduced system of the electronic electoral rolls. The National Election Commission said integrated electronic poll books will be used in the April 24 by-elections, allowing voters to participate in absentee voting without prior registration.

“By introducing this new system, voters eligible to participate in the by-elections can vote even before election day,” the election watchdog said. “The new system effectively lengthens the voting day from one day to three days.”

Until now, hard copy electoral rolls were created separately for each city, county and district. Under the new system, an electronic database of voters will be created and the National Election Commission can check whether a voter is eligible to cast a ballot in the by-election or not right at the polling station.

Until now, the complicated system of registering for absentee voting has been seen as an impediment to voting.

On the Election Day of April 24, the polling stations will stay open from 6 a.m. till 8 p.m.

Soldiers or others who have trouble reaching polling stations can vote under the old absentee voting system by registering in advance and receiving ballots to be sent through the mail.

Before the December presidential election, the liberals demanded that voting hours be extended to accommodate more voters in the evening, who are often young voters. That argument is outdated with the new electronic poll books.