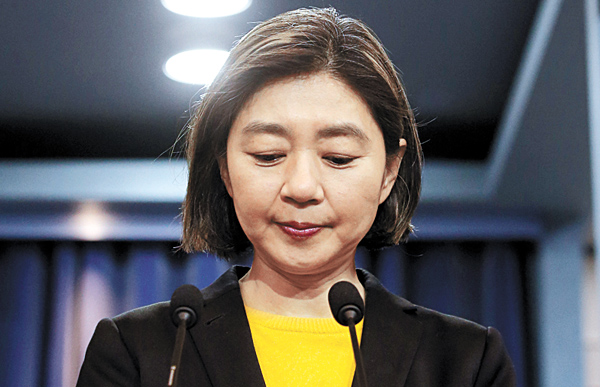 The Park Geun-hye Blue House issued an apology to the nation for a series of botched nominations of top officials who walked away from the jobs because of insalubrious pasts.

But the 17-second apology issued Saturday only invited more fury at the government’s attitude from both the opposition and ruling parties.

On Saturday morning, Kim Haing, Blue House spokeswoman, read a statement issued by presidential chief of staff, Huh Tae-yeol. In the two-sentence statement, Huh apologized for “troubling the people over the appointments by the new government,” and added that its vetting system will be improved.

Criticism has mounted over the last month that the Park administration owes an apology for its poor selection of top officials. Starting with her fumbled nomination for prime minister of Kim Yong-joon, a former Constitutional Court chief justice, six vice minister and ministerial-level nominees bowed out because of skeletons found in their closets.

Asked if anyone would take responsibility for the vetting, spokeswoman Kim said, “For now, the chief of staff’s statement says it all.”

The ruling Saenuri Party lamented the Blue House’s handling of the situation. “They could have stopped the flak with a small hoe before,” said Representative Kim Yong-tae. “But now you can’t stop it with a shovel!”

A group of 31 ranking members and chairman of the party, 25 senior officials from the administration, including the prime minister, nine top aides from the Blue House and the chief of staff, held a workshop Saturday afternoon. During the four-hour meeting, Park’s aides were bombarded by angry complaints from the ruling party, particularly over the failed vetting.

According to a Gallup poll conducted last week, Park’s approval rating was 41 percent, down 3 percentage points from the previous week. The figure is the lowest since 1987 among presidents in their first month in office.

Representative Yoo Seong-min said the ruling party is in a hot seat with a by-election this month and local elections next year.

The lawmakers also demanded that the Blue House improve its communications with the ruling party.

Representative Na Seong-lin, the party’s acting chief policy maker, said the presidential office must consult with the party about all policies.

“The Blue House has lost any kind of decency before the people by making its spokeswoman read an apology on a weekend while no one is assuming responsibility,” Kim Hyun, DUP spokeswoman, said. “President Park must punish the chief of staff and senior civil affairs secretary.”