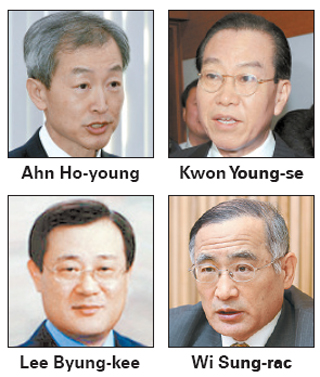 Ahn, 57, is a native of Seoul who studied diplomacy at Seoul National University. He passed the foreign service exam in 1978 and took high-ranking posts in the Foreign Ministry.

Ahn is known as a trade expert as former director of the bilateral trading department at the Foreign Ministry. Ahn coordinated negotiations for Korea’s free trade agreements with both the United States and European Union.

He also worked as South Korea’s special ambassador to the Group of 20 summit and was recognized for his dedication to Korea’s hosting of that international event. He became first deputy foreign minister in February 2012.

However, it is unusual to send a trade expert to Washington where issues are usually political and military, particularly in regards to North Korea, rather than economic. It is also rare to appoint a deputy-ministerial-level person to the Washington post.

For Beijing, Kwon Young-se, a former Saenuri Party lawmaker and a member of the inner circle of President Park, was appointed.

Kwon, 54, is a SNU graduate in law and a former senior prosecutor specializing in public security. He entered politics in 2002 and became a three-term lawmaker in Seoul. He was a main architect for Park’s campaign last year and is recognized for helping her win the presidency.

Although Kwon has little experience with diplomacy with China, he was the architect of Park’s campaign’s “Plan for peace and cooperation in Northeast Asia.”

For ambassador to Japan, Lee Byung-kee, 66, a political adviser at the think tank of the Saenuri Party, was appointed. A native of South Chungcheong, Lee is also a graduate of SNU who passed the foreign service test. He started his political career in 1985 as an aide to Roh Tae-woo, then-head of the ruling Democratic Justice Party. He took high-ranking positions in the Kim Young-sam administration, including second deputy director at the nation’s chief spy agency, and the Roh administration. He left politics and became a visiting professor at Keio University in Japan.

For Russia, Wi Sung-rac, the former ambassador, will remain in his post. Wi, 59, is from North Jeolla and holds a bachelor’s degree from SNU’s diplomacy department. Wi is considered strong on North Korea’s nuclear weapons program and diplomacy between Pyongyang and Washington.

When North Korea withdrew from the Non-Proliferation Treaty in 2003, Wi was in charge of diplomacy with Pyongyang and Washington. In 2009, he was appointed chief of the bureau for peace on the Korean Peninsula, an organization under the Foreign Ministry in charge of six-party talks and other negotiations with Pyongyang.

For ambassador to the United Nations, Kim Sook, 61, will also stay in his position. Kim, 61, a graduate of SNU, was a former chief at the same bureau Wi worked at, and a former first deputy director at the National Intelligence Service.