A local museum in Cheongdo County, North Gyeongsang, which was opened in 1993, rarely has visitors. By Gong Jeong-sik

Though it should have been filled with cars on a Saturday afternoon, the parking lot of the Hapcheon Museum in Hapcheon County, South Gyeongsang, sat completely empty when the JoongAng Ilbo visited on March 23.

By the end of the day, the local museum had a paltry total of 20 visitors. The Hapcheon Museum, built in 2004 with a local government budget of 8 billion won ($7.18 million), displays relics from the Three Kingdoms period that lasted from the 4th to the 7th century.

Among nearly 310 relics on display at this unpopular museum, more than half, or 162, are replicas, as those relics deemed as historically important were transported to the better-managed National Museum of Korea in Seoul.

As word spread that a considerable number of displayed artifacts are replicas, people lost their interest. 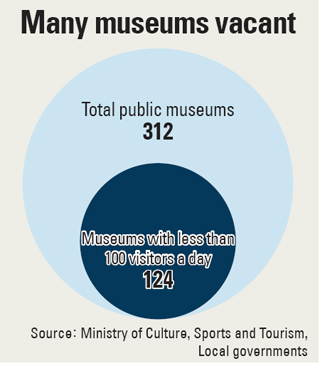 In 2012, the museum earned a mere 3.45 million won in ticket sales, with the average number of daily visitors at 63.

Despite ticket sales revenue way below the 5-million-won mark, it cost the country office 360 million won last year to keep the museum running.

“Most of the displays there are reproductions and there is nothing to see besides those duplicates,” said a Hapcheon County resident named Lee Jeong-hoon.

The Hapcheon Museum is not the only museum shunned by locals.

The Sancheong Museum located in Sancheong County, South Gyeongsang, a two-story, tile-roofed structure opened in 2008 after 2.04 billion of taxpayer’s money was spent on construction, drew in around 3,600 visitors for the entire year of 2011.

“The museum lacks displays that could appeal to people and has poor accessibility for locals and tourists because of its location,” explained a Sancheong County office worker about the museum’s low popularity, speaking on condition of anonymity.

Lack of public interest and marginal ticket sales caused a forced closure of the Ulsan Okhyeon Relics Exhibition Center, which opened in 2002 in Ulsan after some ancient artifacts were found in an apartment construction site in the city.

Many museums managed by local government offices have become white elephants as fewer and fewer people stop by despite the taxpayer money pumped in to keep them open.

According to the Ministry of Culture, Sports and Tourism, the number of municipal-government office managed museums has surged over the past 10 years, from 70 in 2003 to reach 313 this year.

Money spent on museum construction, which could cost at least a few hundreds of millions of won up to 10 billion won for one museum, have all come from taxpayers.

“Many local governments rushed to build museums now in trouble without going through management-profit analysis,” said Prof. Yook Dong-il of Municipal Governance at Chungnam University in Daejeon. “Local museums are one of the white elephant projects that waste taxpayers’ money.”

Lax regulations on museum establishment are also attributed to a rapid increase in its numbers. Under the current law, any municipal public offices that have budgets and the proper construction ordinances are allowed to build exhibition centers.

According to data compiled by the Culture Ministry in 2011, which was disclosed by Representative Cho Hae-jin of the ruling Saenuri Party in August of last year, 124 museums, or 40 percent, of the total 312 museums in the country has less than 100 daily visitors on average.

“So many empty museums in the county are a direct result of senseless policies by local government heads, who built the museums in hopes they would garner votes in elections,” said Lee Kwang-jae, deputy director at the Korea Manifesto Center. “We need stricter regulations to build museums to prevent more waste of taxpayer money.”