Pills made from babies’ corpses are smuggled in

Pills made from babies’ corpses are smuggled in 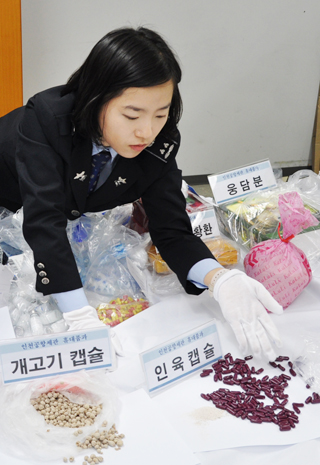 In February, a 19-year-old ethnic Chinese landed at Incheon International Airport and went through customs. When a customs officer opened up one of her suitcases, 200 plum-colored capsules spilled out.

He asked what the pills were.

“It is a medicine produced with placenta extract,” the visitor replied. “I brought them for my health.”

The officer confiscated the capsules and sent them to the Central Customs Laboratory and Scientific Service to be tested. A few days later, the result was in.

“The DNA of the substance in the capsule is 99 percent human DNA.” The capsules were filled with powder made from human flesh.

According to Incheon Airport Customs yesterday, people from China and Southeast Asian countries have smuggled 468 kilograms (1,100 pounds) of dog meat and human flesh into the country via the airport on 1,715 separate occasions in 2012.

It added that 23,898 capsules confiscated from January last year to this February were filled with human flesh powder.

Customs said people in China reduced the corpses of babies to powder, put them in pills and smuggled them into Korea for their own use or to use as presents for friends.

“Since we boosted inspections of incoming bags, people have tried to smuggle them via international mail,” a customs spokesman said.

A total of 3,030 capsules were found in international mails last year, up from a total of 968 capsules found in 2011.

According to urban legend, the capsules boost male sexual performance.

Customs said the confiscated capsules are discarded, but there is no legal way to punish the people that bring them in.

A change to the law that imposes a maximum 10-year prison term or a 50 million won ($44,990) fine against people smuggling them in or out of the country is waiting for the National Assembly’s approval.