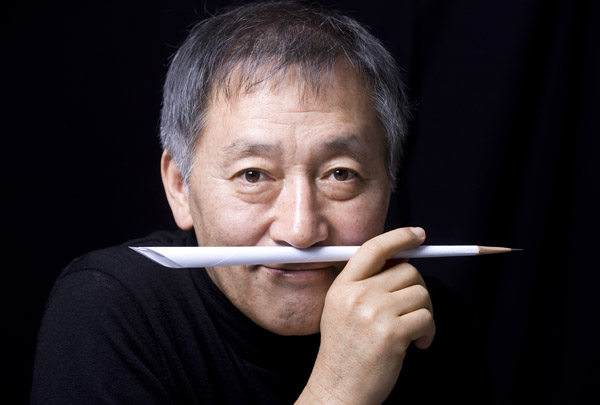 Lee Hyun-se continues to sketch only with pencils even as Web toons gain popularity. [JoongAng Ilbo]

There are already various versions of the story, but this newest version is gaining attention since Lee has been good at portraying the spectacular lives of heroes so far. Considering his previous works such as “A Daunting Team” (1982), “Nambul: War Stories” (1993) and “Armageddon” (1995), Lee’s own interpretation of Chinese history should be a big hit.

The 59-year-old isn’t just known for his writing; he has also had a difficult childhood. During the 1950-53 Korean War, he had to watch his first uncle die because a relative was an officer in the North Korean People’s Army. He then later discovered that the uncle was in fact his biological father, a shock from which he struggled to recover.

Amid the chaos, becoming a cartoonist emerged as the only option that was able to send Lee on a more stable life path.

To hear about his journey, full of ups and downs, the JoongAng Ilbo met the artist at his workroom in Gaepo-dong, Gangnam District. At the time, he was busy finishing a comic to be published in May. 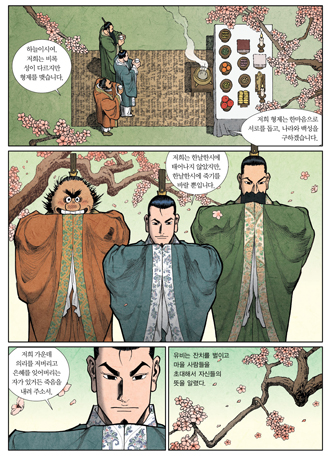 Zhang Fei, Liu Bei and Guan Yu are the three main characters in “Records of the Three Kingdoms.”

Q. How long did it take to finish the book?

A. It took three years starting from the planning stage. I thought it would only take about 18 months, but I had stomach cancer surgery last year. After the treatment, I’ve pursued a more health-conscious life without drinking and smoking. Instead, I take time for introspection.

Isn’t it difficult to come up with innovative ideas when you are living a temperate life?

Yeah, it’s true. You can create a story with a bad guy if you actually know how to act like the character. But I’ve become a more moderate person. I used to be mean to many people. For instance, when junior colleagues wanted to leave a gathering early while drinking at a bar, I teased them and said they were cowards. But after being sick in bed, I’ve changed and believe I better understand myself.

Why did you choose the Three Kingdoms story for your new release?

Every male artist would want to give this story a try at least once. I’m interested in describing a certain character in my own point of view. So in the upcoming piece, I will emphasize the antagonistic relationships between Zhao Yun, the man who is always faithful, and Lu Bu, the one who is always dishonest.

Can you compare your story to late cartoonist Ko Woo-young’s version?

Ko’s work is really fabulous, but it’s mainly for adults. I prefer a story that can also be understood by kids. Since I published comics with simpler plots such as “Taking an Appropriate Look at Korean History,” many children began to recognize me, and I’m happy about that. Anyway, in my new book, you’ll be drawn to the Battle of Red Cliffs, a decisive moment at the end of the Han Dynasty.

Could you elaborate on your difficult life?

In my 20s, I was wild. I was too confident in my 30s after the hugely successful “A Daunting Team.” My 40s flew by thanks to rumors that “Mythology of the Heavens” (1997) was pornography as I’ve spent a lot of time dealing with a lawsuit.

Now, my 50s also gone. A long time ago, I decided to write stories for children when I reached my 70s. So I only have 10 more years as a cartoonist. Time is ticking.

Are you planning any other publications?

I’m not sure, but if I publish another work, it won’t be about an ordinary person. Among my works, I like the main character Kkachi from one of my series. He knows that hardships are waiting for him but never gives up.

I also like Zhao Yun from the Three Kingdoms story because he is honest and sincere about the wars and his life. I want to work on something that involves similarly strong men.