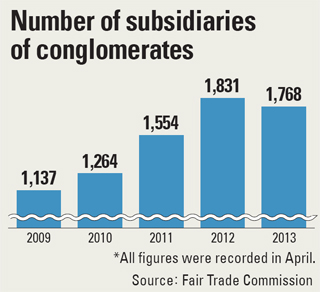 The Fair Trade Commission prohibited yesterday 62 companies with over 5 trillion won ($4.5 billion) in assets from allowing affiliates to buy new shares in each other in a bid to prevent excessive expansion of big businesses.

The agency has begun making the list every year since 2009.

Once on the list, a group cannot allow subsidiaries to make new investments in one another and they must report existing cross shareholdings. In addition, inter-subsidiary business transactions have to be reported to the authority.

For the past five years, the FTC compiled financial information on major corporations and their subsidiaries in order to improve transparency and aid the government’s making of policies that deals with businesses.

The FTC said Hansol and Amore Pacific’s assets recently increased, which put them on the list. Daehan Cable, Eugene and the Korea National Oil Corporation were dropped this year because of their sales of subsidiaries.

Of the total, 51 are private sector companies, including the country’s largest conglomerates: Samsung, Hyundai Motor, SK, LG and Lotte.

The FTC also announced a list of groups owning the largest number of subsidiaries.

The 62 companies banned from making mutual investments own a total of 1,768 affiliates, according to the agency. The number fell for the first time since 2009 when the government began keeping track.

Those companies own 28.5 subsidiaries on average, slightly down from last year.

The FTC said the companies that have been under monitoring by the government did make efforts to reduce subsidiaries by selling or merging unprofitable and peripheral units.

The average assets of the 62 businesses stood at 34 trillion won, up 2.6 trillion won from last year.