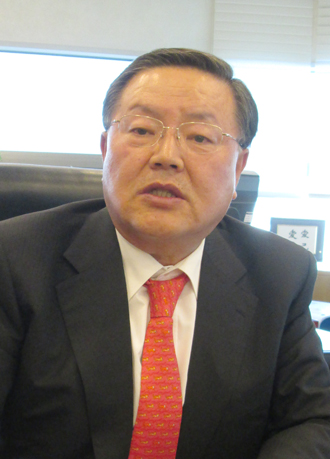 Yongsan Development Company Chairman Park Hae-chun said Korea Railroad Corporation (Korail) doesn’t seem to have the will to revive the nation’s largest urban development project, although he believes it would be the right thing for the railroad operator to step up.

Park took the job in October 2010 after Korail and Lotte Tour asked him to stabilize the Yongsan International Business District development plan. However, the former CEO of Woori Bank and the National Pension Service will submit his resignation today, citing pressure from Korail, which asked him to take responsibility for the state of the project.

The state-run company is the biggest shareholder of Dreamhub Project Financing Vehicle, a special purpose company founded for the Yongsan project.

Park’s Yongsan Development Company is the asset managment company (AMC) of Dreamhub. During his tenure, Park said he tried without success to bring in investors from China and the Middle East to keep the project healthy. And he was criticized for receiving a large salary while the project was sinking.

Dreamhub declared default last month and will officially face bankruptcy if it can’t pay back 1 trillion won ($896 million) worth of asset-backed commercial paper that will expire in June.

The recent default has pushed Korail to come up with a normalization plan for the 31 trillion won development project. However, investors have opposed the idea, saying Korail included a clause that enables the state-run company to cancel the project if necessary. Investors must send their letter of agreement by Thursday if they accept the plan.

In an interview with the JoongAng Ilbo on Friday, Park said more construction experts should be involved in the project, citing that nearly half of board members have no experience in real estate development.

The 66-year-old also proposed that Korail should also embrace global companies like Samsung. Last week, Samsung C&T, a construction unit of Samsung Group, gave up its right to build a landmark skyscraper in the project after accepting Korail’s proposal to pay 68.8 billion won worth of convertible bonds in return as part of its normalization measures.

Q. What do you think about Korail’s normalization plan?

A. Korail’s request for investors to submit a special agreement on their normalization plan is extreme arrogance that even ignored a law. Something out of common sense is happening with Korail getting the right of scrapping the project. Even if private investors want to agree, they can’t do it.

It is the right time for Korail to step up, but the problem is that it wants to solve all things by itself. Korail doesn’t have experience in real estate development. Even if it has high credibility, who will invest? To bring in foreign capital, we need credibility from global companies like Samsung.

You mean Samsung should come forward?

Yes. Samsung should actively come out. Korail also should embrace Samsung. City of Seoul and the government also need to come forward. If they can’t inject public funds, they should at least ease taxes or other supports on licenses or regulations. But what’s important is that Dreamhub and Yongsan Development Company should also bring in more experts in real estate developments.

After all, it’s all about the profitability of the project, right?

Korail insists that the project lacks profitability, but that’s such a stubbornness. It’s true that the real estate market is not good, but this project is different. Those who have 10 trillion won worth of capital showed their intention to invest. If there is no business value here, funds from China and the Middle East wouldn’t have shown interest.

However, no foreign investment has been made. Why?

How can we invite investors with a building that hasn’t obtained construction approval yet? In addition, foreign investors don’t trust the Dreamhub board, as it lacks professionalism. What we can do right now is to find investors and get them interested in investing. But in this situation, even Warren Buffett would not even make a good result.

What will you do after the retirement?

I will put my best effort forward like an enlisted man in a war, so that the 10 trillion won fund from China and the Middle East can actually be injected into the project. For 22,000 residents of Seobuichon-dong, investors should yield and pull out a good normalization plan.