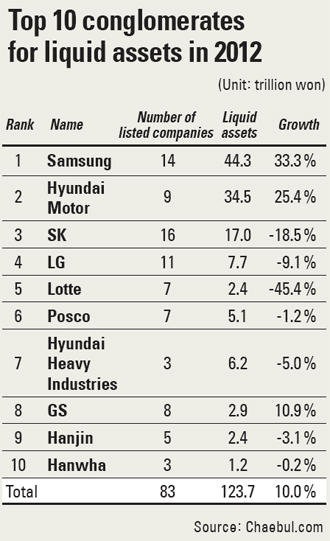 Korea’s top 10 conglomerates’ holdings of liquid assets jumped to a record 123.7 trillion won ($111.1 billion) in 2012, up 10 percent compared to the previous year, according to data by Chaebul.com, a corporate information provider.

The data released yesterday analyzed the financial status of 83 listed companies under the conglomerates through December and found a combined 46.9 trillion won ($42 billion) or 38 percent of liquid assets in short-term financial instruments. The remaining 76.8 trillion won was in cash reserves.

The high level of liquid assets indicates reluctance to invest in new projects.

Liquid assets refers to assets that companies can easily covert to cash without having to pay significant transaction costs. They include cash, cash equivalents, bank deposits and other short-term financial instruments.

The combined liquid assets of Samsung Group and Hyundai Motor stood at 78.8 trillion won, or 63.7 percent of the total of the top 10 conglomerates.

Samsung Electronics held the largest level of liquid assets at 37.4 trillion won last year, up 39.3 percent compared to 2011. The world’s largest smartphone maker set a revenue record of 201.05 trillion won in 2012, becoming the first Korean company to surpass 200 trillion won thanks to strong sales of the Galaxy S3 and Galaxy Note 2.

Although Korea’s top automaker Hyundai Motor reported disappointing domestic sales, it ended 2012 in second place with 19.1 trillion won in liquid assets, up 24.2 percent year-on-year, thanks to a strong performance overseas.

“Deepening uncertainty in the global economy is the main culprit that discourages manufacturers like us from investing in new projects,” said an executive at a top 10 conglomerate who asked not be named.

But the executive noted that large companies should find attractive investment opportunities in the near future given that the economies in the United States and China are improving.

“Snowballing liquid asset reserves indicates that large companies tend to increase their holdings when economic uncertainty runs high,” said Jeong Seon-seob, CEO of Chaebul.com. “The government should act to encourage conglomerates to invest. Conglomerates need to shift their interest to infrastructure investment from the focus on short-term financial instruments.”