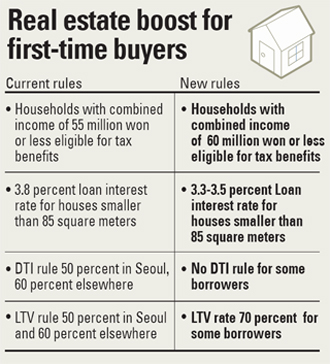 The Park Geun-hye government has taken action to ease loan regulations imposed by the Roh Moo-hyun administration to revitalize the moribund property market, which has been a major drag on the country’s economic growth.

According to the Ministry of Land, Infrastructure and Transport, the Ministry of Strategy and Finance and the Financial Services Commission yesterday, the government will ease some tax and loan rules temporarily and increase financial support for low-income households.

“The essence of the first housing policy package of the Park government is to help ease the burden on working-class people and rebalance supply and demand in the housing market,” said Land Minister Suh Seoung-hwan at a press conference yesterday.

People who plan on buying their first residence, who are young or from low-income households, will benefit the most from the policy package.

According to the plan, first-time home buyers will be eligible for full exemption from acquisition tax and increased financial support from the government if they make purchases this year.

Specifically, households that earn 60 million won ($53,821) or less a year will be exempted from paying the acquisition tax when they buy residences smaller than 85 square meters (914.93 square feet) and less than 600 million won in price until the end of the year.

To support first-time buyers, the government will also provide 5 trillion won annually to the National Housing Fund, up from a current 2.5 trillion won, to allow more people to take loans from the fund. The interest rate for those loans will be cut to 3.3 to 3.5 percent from the current 3.8 percent.

For people who take loans from the fund, the debt-to-income (DTI) regulation will be lifted until December.

The DTI ratio, introduced in 2006 to cool down an overheated market, determines the maximum amount of loans a person can take out to buy a house in proportion to annual income. It currently stands at 50 percent in Seoul, 60 percent for metropolitan areas in Gyeonggi, and 40 percent for the three districts of Seocho, Gangnam and Songpa, where speculation is rampant.

In addition, the loan-to-value (LTV) rate for those borrowers will be raised to 70 percent.

The LTV rate is a gauge used by banks to determine the amount of a home-backed loan approvable based on the price of the house. The rate varies by city but the average is 50 percent for Seoul and its metropolitan area, and 60 percent in rural regions.

The capital gains tax for all home sellers will be exempted during the Park administration in order to encourage people to sell houses.

People who sell newly built or unsold houses that are cheaper than 900 million won don’t have to pay the capital gains tax, which stands at 38 percent for homes priced over 300 million won, at all for five years.

The government will also be more active in balancing supply and demand of the housing market because it believes the current economic slowdown is partly caused by a comatose real estate market and an oversupply.

The government will downsize the public sector’s presence in the market by slashing the number of houses provided by the government for sale from the current 70,000 annually to 20,000. Public houses available for sale will also be limited to less than 60 square meters.

Furthermore, the government will construct no more public housing areas from now on. Called Bogeumjari, those units started to be built in 2009.

The flat housing market has been a major drag on economic growth for the past few years.