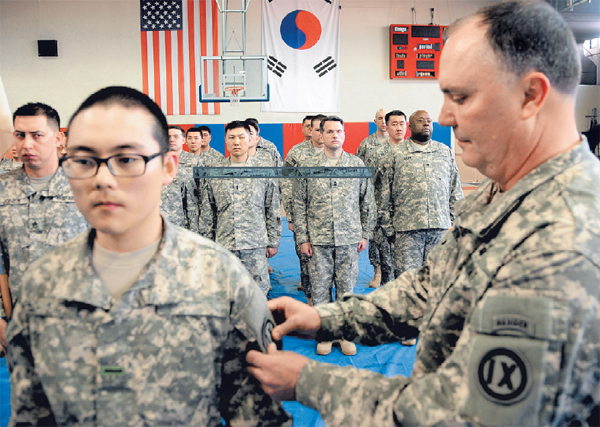 One is a voice actress, another works for a hedge fund in the affluent district of Gangnam in southern Seoul. One teaches criminal justice at a local university, several give English lessons at public schools or private academies and a few are musicians and students. Most work as contractors or non-essential government employees at the headquarters for the United States Forces Korea or the Eighth United States Army. These are the United States Army Reserves (USAR) working in Korea, a new kind of expatriate of a uniquely patriotic kind.

Once a month they assemble in a tradition that is replicated across the United States for what the United States Army Reserves calls a “battle assembly.” To their active duty counterparts in the armed forced they are sometimes jokingly referred to as “weekend warriors.”

But here in Korea they are something more.

As members of the recently activated 658th Regional Support Group (RSG) they are some of the most forward-deployed citizen warriors of the United States Army Reserves. Their lives, homes, families and even retirements are in a country still technically at war.

Designed to run base operations, the 658th Regional Support Group manages functions of what can be comparable to a small city, allowing combat units to focus on their various wartime missions without having to worry about water, fuel, food, billeting, base security and road management.

Their need is great as was demonstrated in Afghanistan and Iraq where RSGs ran massive Forward Operating Bases (FOBs) like FOBs Victory, Caldwell or Eggers. This same need would exist should war come to the Korean Peninsula.

With rotations of servicemen typically set at one year - two for some - the active duty U.S. forces stationed in Korea are in a constant state of flux, turnover being one the biggest challenges to combat units like the 2nd Infantry Division. And while the Eighth United States Army and its subordinate units are home to some of the finest staff sections and soldiers the United States has to offer, they cannot overcome the challenge of yearly attrition. When their members rotate back to their homes in the United States, the knowledge and in-country experience gets on the plane with them.

But for the soldiers and officers of the 658th Regional Support Group, their homes are typically only a few subway stops away from Yongsan Army Garrison in downtown Seoul. Their long-term physical presence in Korea is accompanied by deep relationships they have forged over the years - with the South Korean government, military and business community. Many speak Korean, and nearly all know Korea as intimately as any other ex-pat, perhaps more so.

It’s also a matter of dollars and cents.

Activated in October 2011, the 658th RSG has the distinction of being the newest addition to the United States Army presence in Korea, and the long-term benefits are significant.

As the U.S. military stares down the barrel of budget cuts, the example being set in Korea by the 658th RSG may be one solution to the balance between maintaining capabilities and saving taxpayer dollars. With ever-growing ex-patriot communities in Asia, one option may be an expanded role for the Reserves.

And while most United States Army Reserve units prepare for natural disasters or for a rotations into Afghanistan, Haiti or Kosovo, the 658th RSG trains and readies itself in South Korea, one weekend at a time.