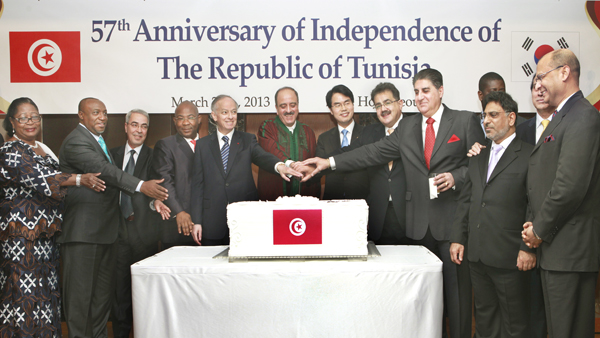 In a night filled with both Korean and Tunisian music and traditional food, foreign dignitaries and Korean guests gathered to celebrate Tunisia’s 57th Independence Day on March 25, at the Lotte Hotel in central Seoul.

“We are looking forward to further enhancing the traditional relationship of friendship and cooperation [of Korea and Tunisia],” said Mohamed Ali Nafti, the Tunisian ambassador to Seoul. “In this regard, I would like to stress with great satisfaction on the fact that our two countries have maintained very warm ties based on mutual respect and common interests since 1969.”

“As a matter of fact, Koica (Korea International Cooperation Agency), is among the public institutions that have been assisting Tunisia in development projects for over 20 years,” Nafti said.

The two countries celebrate 44 years of diplomatic ties this year.

“For us, it’s the day the Tunisian people gained sovereignty [from France on March 20, 1956] and started building a new modern state,” Nafti told the Korea JoongAng Daily regarding the significance of Tunisia’s Independence Day. “And 55 years later, a new date marked the history of Tunisia, the date when the people made their peaceful, spontaneous revolution, on January 14, 2011. From that date, Tunisia started another era in its history, full of hope to build a new milestone in democracy, freedom and development.”

The revolution in 2011 overthrew an autocratic president and the fledgling democracy held its first free elections that year.

“I hope that we could succeed in reinforcing the friendly and strong relationship between Tunisia and Korea that was built 44 years ago on common values of democracy and freedom,” said Nafti.

“We are keen on working on technical cooperation, namely with Koica,” said Nafti. “We are very thankful for the great job done by this institution in reinforcing the relations between the two countries.” Cooperation projects between Koica and Tunisia have existed since 1991 in areas including agricultural expansion and computer science.

“Tunisia is an open economy, and we hope that Koreans will explore the possibilities that the Tunisian business environment offers,” the ambassador added.

He said that he would like to see further cooperation between the two countries in the areas of cultural exchange, tourism, technology and academic research. “We have more than 20 Tunisian students following studies and research in various Korean universities and we are very keen to increase the number of those students.”

“Tunisia is one of Korea’s vibrant trade partners on the African continent and the trade volume has risen more than 50 percent per year,” said Education Vice Minister Na Seung-il in his congratulatory remarks on that day.

“Despite the long distance between Tunisia and Korea,” he said, the bond between the two countries has grown stronger, “especially in the field of economy, science and technology.”