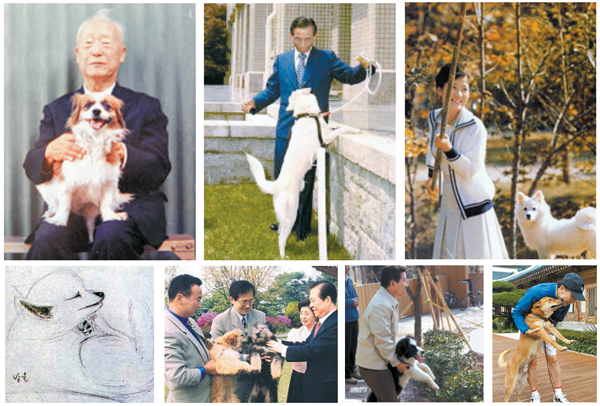 Around the world, reporting on the “first family” can practically be a beat in itself. Fashionistas closely follow first ladies’ attire, and reporters aren’t afraid of taking on a president’s love life or his children’s misadventures.

So, gossip lovers were a little disappointed when a single and childless President Park Geun-hye was inaugurated in February. But they can rejoice in the fact that the president was not entirely alone when she moved into the Blue House.

Accompanying her were two Jindo dogs, born around Jan. 25, who had a high-profile entrance into public life.

Most Koreans will remember that the duo - one female and one male - were presented to the president on the morning of her inauguration ceremony by neighbors from Samseong-dong, southern Seoul. Photos of the two chubby, white puppies with sleepy expressions snuggling in the arms of Korea’s most powerful person quickly made national headlines.

Recognizing the fanfare, the Blue House made its first official announcement about the pets early last month.

“The president has named the puppies. The female is Saerom [new or fresh] and the male is Heemang [hope]. Together, they mean ‘new hope.’?”

It is true that compared to the West, the Korean government may not prove so aggressive in pet publicity.

In the United States, the White House Web site has a separate photo gallery for Bo, the Obamas’ Portuguese water dog.

And who can forget Queen Elizabeth II’s corgis, who starred in a James Bond sketch during the London Olympics last year.

But in light of the increased fanfare over President Park’s puppies and perhaps in anticipation of more publicity, the Korea JoongAng Daily took the opportunity to examine the history of presidential pets in Korea - the animals who serve as the best friends, closest confidantes and even family members of the country’s leaders. 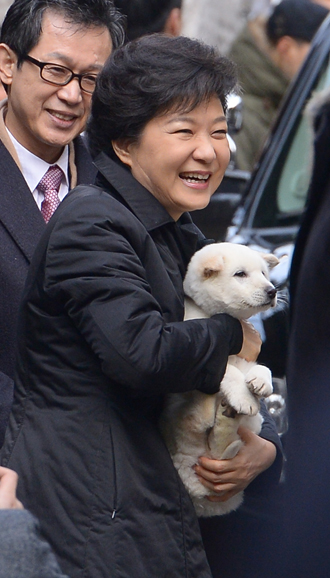 Above: President Park Geun-hye smiles after receiving a month-old Jindo as a present from neighbors on Feb. 25. [NEWSIS]

Being the chief executive of a country and at the center of all authority is said to come with feelings of loneliness and solitude. So it’s no surprise that dogs, known for their loyalty and sense of companionship, have been the most-favored animal friends of Korea’s leaders.

President Park Geun-hye is a well-known dog person, and so was her father and former president Park Chung Hee.

After Park Chung Hee’s wife Yuk Young-soo was assassinated in 1974, the governor of Jindo gave Park a Jindo dog as a condolence gift. The president named it Jindo and raised it with love. Yet while Jindo was loyal to Park, it was aggressive to others and once bit Cha Ji-chul, the chief presidential bodyguard, in the butt.

Its lack of manners saw Jindo sequestered to the president’s private residence in 1978 where it met an unfortunate fate. Separated from its owner, the animal died of loneliness - a fate not uncommon for the breed.

In late 1970s, while Park Geun-hye was living in the Blue House with her father, she raised Bangul (meaning drop or bell), a white spitz. Bangul often appears in family photos, and Park Chung Hee was reportedly also so fond of the dog that he drew its portrait and personally fanned it on sunny days.

Bangul stayed beside Park Geun-hye even after the death of her father, though never fully recovered. The loyal pet reportedly lost vitality and roamed in front of Park’s room all day before falling asleep on his slippers at the door.

It’s unclear when Bangul died, but in 2004, Park Geun-hye wrote on her Web page about how much she misses her four-legged friend.

“I was heartbroken when Bangul passed away as it stayed at my side and supported me after my parents passed away,” she wrote. “I am afraid to get another puppy - to be attached again, to say goodbye again and to miss again.”

But perhaps her love for dogs was too strong to resist or the gift of pets too generous to refuse.

She eventually got two new Jindos - named Bongdal and Bongsun - from her younger brother Ji-man and lived with them in Samseong-dong for some time. When the two had puppies in 2005, she reportedly gave out seven to ordinary citizen.

And now, of course, she has embarked on the journey of pet ownership once again.

To Korea’s first president Syngman Rhee and his wife Francesca Donner, Happy - their English Toy Spaniel - was like their child. Happy often posed with them in official family portraits and understood English since that was the language the couple spoke to each other.

When the Korean War erupted in 1950, Happy went missing amidst the chaos that gripped the nation and was presumed dead. But some time later, Happy came back in skin and bones, and President Rhee said in tears, “It’s a miracle!”

They were to be separated once again when Rhee took up exile in Hawaii in 1960, but as luck would have it, they would be reunited when an architect traveling to Hawaii agreed to give the pooch a lift on his ship. People close to the president say Happy was right beside Rhee when he passed away July 19, 1965.

Chun Doo Hwan also had dogs: two Jindos named Songi and Seori. He reportedly fed and walked them himself when time allowed. But his close attachment to the animals was no help when his assets were seized during corruption investigations as even the two dogs were appraised and sold at auction. It is rumored though that the buyer couldn’t bear to take the animals away and returned them to Chun. 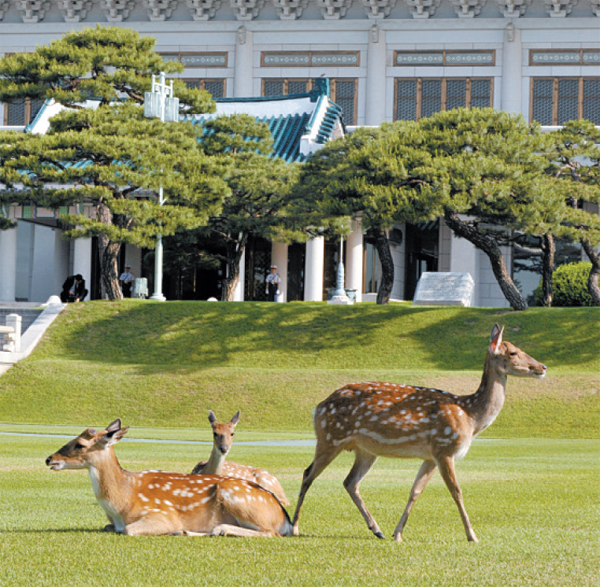 Left: Park’s pets will have other animal friends in the Blue House, like these Formosan deer. As they’ve quickly multiplied since being acquired by President Lee Myung-bak, the offspring have emerged as a major headache for government officials. [JoongAng Ilbo]

The dogs of former president and Noble Peace Prize winner Kim Dae-jung were more than just pets, but symbols of peace and reconciliation between the two Koreas.

The Pungsans - indigenous to Pungsan County of Hamkyong Province in North Korea - were a present from Kim Jong-il given after the two met at the historic 2000 summit between the two nations. In return, Kim Dae-jung gave his North Korean counterpart two Jindos, indigenous to Jindo in South Jeolla.

Because of their symbolic significance, the two pets - one named Uri (meaning us) and the other Duri (two) - were sent to the Seoul Zoo so that more people could see them and remember the 2000 summit. The Jindos sent to Pyongyang - named Pyeonghwa (peace) and Tongil (unification) - are also reportedly on display at a zoo.

Roh Moo-hyun reportedly got Kim Dae-jung’s Sapsals and Jindos when he entered the Blue House, but decided to send them away since they had trouble bonding with a new owner.

Roh kept just one dog after he retired and moved back to his hometown in Gimhae, South Gyeongsang - a Border Collie named Nuri. The two were said to enjoy the countryside together until the former president took his own life. After the death of his owner, Nuri reportedly went to a trail where it often walked with Roh and never came back.

Former President Lee Myung-bak also has a dog he adores: a Jindo named Cheongdol. Its mother has been with Lee since he was a presidential candidate living in the Gahoedong area of central Seoul.

“Cheongdol accompanies me on my way to work. A bird rises up the tree branch; a ray of sunshine permeates the tree leaves. Our eyes lie on the same things almost at the same time,” Lee wrote whimsically on Facebook in 2010 alongside a photo of his beloved pooch.

As diverse as the presidents were in terms of politics and family, it’s clear that most had one common feature across the decades: a preference for Jindos - and it’s not just a quirk.

The breed, known for its agility and exceptional sense of smell and hearing, was actually designated as Natural Monument No. 53 in 1962.

“Although the Jindo is not officially a national dog, it’s the breed that most Koreans associate with and keep close to their hearts. I think that is why most Korean presidents opt for Jindos,” Im Tae-yeong, the head of the Korean Association of Jindo Dog Preservation, told the Korea JoongAng Daily. “Although some people believe Jindos are too aggressive, that’s not true.”

For now, man’s best friend seems to have captured our presidents’ hearts and the attention of everyday citizens as well. They’ve kept other animals out of the spotlight, but perhaps that’s a good thing.

Though they were cute for a while, they’ve reportedly become a major headache. Notoriously fertile, the animals now have 26 offspring that spend their time eating carefully pruned flowers and going to the bathroom wherever they please.

Something says they won’t be making an appearance in presidential portraits anytime soon.