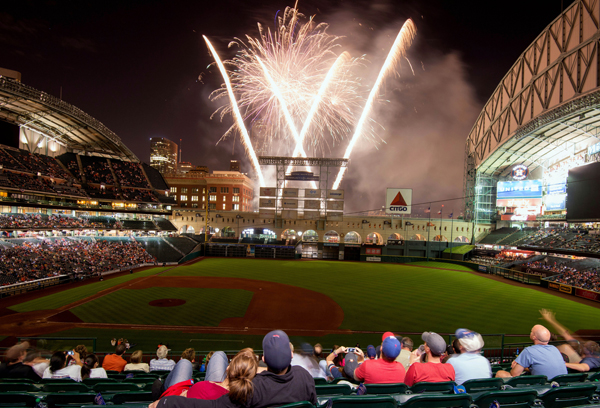 Melissa Bull and Byron Wilcher watch as fireworks explode after the Houston Astros’ 8-2 win over the Texas Rangers in a season-opening baseball game Sunday at Minute Maid Park in Houston. [AP/NEWSIS]

The Kansas City Royals have been absent from the playoffs since the day Billy Butler was born. They’ve barely had a winning season in the past two decades. They’ve often lost 100 games in a year.

And yet, buoyed by the best record in spring training, hope abounds - for the Royals, for almost everybody putting on a big league uniform.

“There’s no reason we shouldn’t be better,” said Butler, the Royals’ All-Star slugger. “How much better, that is? I’m not a mind-reader. I’m not a projector.”

The hot dogs taste better, the box scores mean more and almost every team thinks it’s just a break or two away from reaching the World Series.

A dozen games were set for Monday across the majors. Star pitchers Justin Verlander, Stephen Strasburg and Adam Wainwright try to get off to great starts, old rivalries are renewed at Yankee Stadium and Dodger Stadium, and a quirky interleague schedule unfolds.

No snow is in the forecast for any ballpark, but freezing temperatures are expected at Target Field in Minnesota when Verlander and the AL champion Tigers take on the Twins.

“It’s going to be cold, but I’ve pitched in that kind of weather before,” Verlander said. “I don’t think about it. It’s always cold in Detroit on opening day.”

The season started Sunday night in Houston when the Astros, who shifted from the National League to the American League during the winter, hosted the Texas Rangers. Astros righty Bud Norris threw a called strike to Ian Kinsler to begin the year, and Houston’s Jose Altuve singled for the first hit.

Long the site of baseball’s traditional opener, Cincinnati was going to have a new look Monday. That’s when Josh Hamilton and his new Los Angeles Angels teammates visit Cincinnati in the first interleague matchup this season.

The Astros’ move left 15 teams in each league, meaning an AL vs. NL matchup almost every day this season.

On both coasts, there was a very familiar look - Red Sox-Yankees and Giants-Dodgers.

At Dodger Stadium, Matt Cain starts for the World Series champion San Francisco Giants when they play Los Angeles in the century-old rivalry.

It will mark the 64th season at the microphone for Dodgers announcer Vin Scully. Heck, Tigers manager Jim Leyland seems like a mere pup by comparison, now starting his 50th year in pro ball.

All-Star shortstop Hanley Ramirez is sidelined for the Dodgers.

Around the majors, third basemen Chase Headley of San Diego, David Freese of St. Louis and Brett Lawrie of Toronto will begin the season on the disabled list.

On Tuesday, there are two more openers - Baltimore at Tampa Bay, and Cleveland at revamped Toronto.