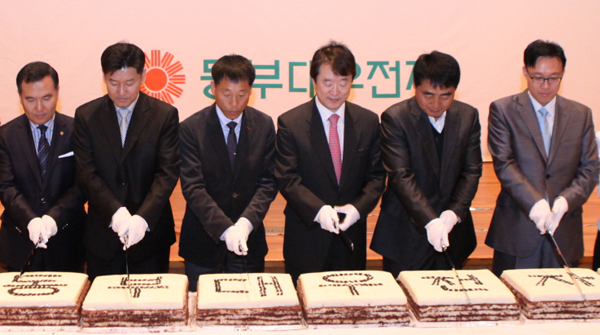 Dongbu Daewoo Electronics executives, including Vice Chairman and CEO Lee Jae-hyung, third from right, cut a cake yesterday at an event at the Dongbu Finance Center in Daechi-dong, southern Seoul. Provided by the company

It said the change will beef up its identity as the electronics, IT and semiconductor arm of its new mother company, Dongbu Group.

But it will continue to use the Daewoo Electronics brand name overseas for the time being to avoid consumer confusion and to maintain the credibility of its existing products.

Domestically, brand names on some refrigerators and washing machines such as Daewoo, Klasse and Mini will remain unchanged for the time being for the same reason.

At the Dongbu Finance Center in Daechi-dong, southern Seoul, in the presence of some 100 executives and guests, Dongbu Daewoo Electronics disclosed a goal of achieving 5 trillion won ($5.5 million) in sales and operating profits of 300 billion won by 2017.

The gadget producer plans to diversify its product portfolio, raise its foothold in the mid-priced product range and boost its market share in emerging markets such as Latin America.

“By pulling up our competitiveness in all dimensions ranging from sales to production, development and management and enforcing synergy with the existing electronics business, we will focus on improving sales and profitability and grow into a comprehensive electronics firm,” said Lee Jae-hyung, vice chairman and CEO of the company, at the event.

Dongbu clinched a deal to buy Daewoo in January from creditors and the acquisition was completed in mid-February.