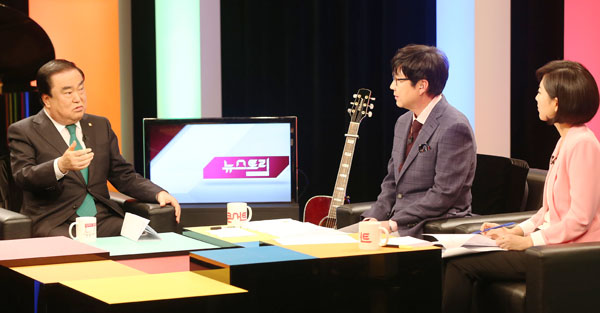 Moon Hee-sang, left, interim leader of the Democratic United Party, appeared yesterday on the talk show News Concert of the JTBC, the TV network of the JoongAng Media Group. By Oh Jong-taek

After the largest opposition party lifted its policy of boycotting the four general-programming cable channels, allowing its lawmakers to exercise their own discretion as to where they appear on TV, its interim head made his first appearance on JTBC yesterday.

Moon Hee-sang, emergency chairman of the Democratic United Party, appeared on the talk show News Concert of the JTBC, the TV network of the JoongAng Media Group. The program aired yesterday afternoon.

“From now on, it will be up to the individual members to decide,” said Representative Min Byung-doo, the chief public affairs strategist for the DUP. “We also informed the general-programming cable channels about our position.”

After the ruling Grand National Party, the predecessor of the Saenuri Party, railroaded a package of bills to clear a path for newspaper companies and conglomerates to enter the country’s broadcasting business, the Democratic United Party decided that its lawmakers are banned from making appearances at the four newly created general-programming channels - JTBC, TV Chosun, Channel A and MBN.

The stance, however, was largely criticized after the DUP lost the December presidential election to the Saenuri Party, which aggressively used the networks to make appearances.

Observers pointed out that the party’s ban hurt its opportunities to utilize a wide range of media outlets, while the conservative ruling party managed to use the programs to its advantage.

After the bitter presidential defeat, complaints grew from inside the party about the ban. While the party leadership debated on what to do, some lawmakers chose to appear on some of the cable stations, challenging the effectiveness and legitimacy of the ban.

Representative Min claimed yesterday that the party never adopted a formal platform to restrain its lawmakers.

“Because many lawmakers are feeling uncomfortable, we are asking them to use their discretion,” Min said.

“Instead of saying that our stance has failed, I should say it is more appropriate for us to use media aggressively by selecting topics and recommending panelists like we used to do,” he said. “Moon’s appearance on the JTBC’s one-hour talk show should be seen as setting the example.”

According to a recent analysis of the seven surveys by the JoongAng Ilbo, SBS, East Asia Institute and Hankook Research conducted before and after the presidential election, 65.9 percent of Park Geun-hye supporters and 62.7 percent of Moon supporters said they obtained information about the election from three terrestrial broadcasters.