Park tells military to strike back if attacked

Park tells military to strike back if attacked 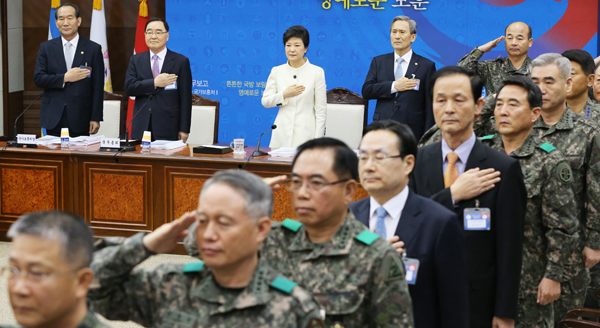 President Park Geun-hye pledges allegiance to the nation with military leaders yesterday in the Defense Ministry office in Yongsan, central Seoul, before officials give her a briefing on policy plans. [Joint Press Corps]

President Park Geun-hye yesterday ordered the South Korean military to strike back against any North Korean attack without hesitating over political considerations.

The Ministry of National Defense yesterday briefed Park about this year’s operations. In her opening address, Park raised the subject of North Korea’s recent volley of threats against the South and stressed the importance of the military’s readiness to respond.

“If a provocation takes place against our people and the country, you must not take any political consideration and respond strongly at the initial stage of a battle,” Park said. “In the case of a surprise provocation by North Korea, I, as commander in chief, will trust the judgment of the military which encounters the North directly.”

The remarks hint at Park’s permission for the military to fire first and report later in the case of an attack by the North.

Park asked the military to pay special attention to the safety of South Koreans working at the Kaesong Industrial Complex. Pyongyang threatened Saturday to shut down the inter-Korean project, through which it earned about $80 million in 2012 alone. It is the last remaining example of inter-Korean cooperation and it operated as usual yesterday.

At the briefing, the ministry reported to Park that it will create specific deterrence measures for different scenarios of a nuclear crisis.

“The reconnaissance capabilities of the military will be strengthened,” Defense Minister Kim was quoted as saying in the ministry’s press statement. “We will establish a proactive deterrence strategy and strike system to incapacitate the North’s nuclear and missile threats at an early stage.”

The Joint Chiefs of Staff is currently working on the proactive deterrence strategy, which will include preemptive strikes. Before the National Assembly on March 6, Jung Seung-jo, chairman of the joint chiefs of staff, made clear that preemptive strikes on the North’s nuclear facilities are a matter of exercising the right of self-defense and Seoul does not require Washington’s consent to make them.

With the new strategy, the South intends to launch preemptive strikes within 30 minutes of detecting signs of an imminent attack by the North using weapons of mass destruction including nuclear weapons.

The backbone of the strategy will be the establishment of a so-called “Kill Chain” and the completion of the Korean Air and Missile Defense regime. A kill chain refers to the deployment of various intelligence assets, missiles, fighter jets and vessels to detect, identify and intercept the North’s missiles.

The military plans to deploy ballistic missiles with a range longer than 500 kilometers (310.68 miles) and improved reconnaissance capabilities to form the kill chain.

The ministry also said South Korea and the United States will develop their joint deterrence strategies to counter various scenarios of the North’s nuclear crisis by July. Different action plans will be created to counter the stages of threats, imminent usage and usage.

The ministry also briefed Park about its plan for military responses to cyber attacks by the North. The South Korean military will recruit forces to carry out cyber warfare and develop a joint cyber warfare system with the United States, the ministry said.

Kim also briefed Park that the 60-year-old Korea-U.S. alliance will be reinforced further amidst the North’s increasing bellicosity. The ministry said it will stick with the 2015 deadline for the handover of wartime operational control of Korean troops from Washington to Seoul.

Through a Military Committee Meeting between the two countries in April this year, Seoul will seek an agreement with Washington on the concept of a future joint command structure which will replace the current Korea-U.S. Combined Forces Command. At a Security Consultative Meeting between Kim and his U.S. counterpart in October, Seoul will seek an endorsement of the new joint command structure.