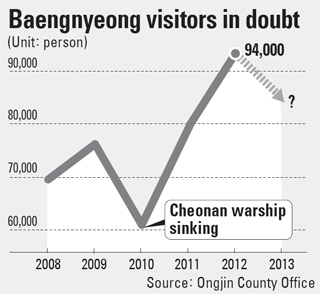 BAENGNYEONG ISLAND, Incheon - A memorial ceremony for the 46 sailors who died when a North Korean torpedo sunk the Cheonan warship in the Yellow Sea three years ago was held on March 27 at Dumunjin Port in Baengnyeong Island, Incheon.

In the past, the place has been a popular tourist site with the nickname “Mount Kumgang in the Yellow Sea,” with its beautiful scenery and strangely colored rock formations.

Tour buses normally bring in many international and domestic tourists. There’s usually a long line to get a cruise ship ticket in the port area.

But the scene of the island on March 27 was different. Only a few tourists were seen all day and many seats on the cruise ship were empty.

“One cruise ship can carry 60 passengers and the ship was normally crowded,” Kim Jong-hyun, 53, who has operated a raw fish restaurant for 12 years, told the JoongAng Ilbo.

“But since North Korea’s recent threat of massive military aggression toward the South, the number of tourists visiting the island has sharply dropped. It feels like it is back to 2010 when the North attacked the Cheonan warship. I’m afraid to pick up the phone because I had so many reservation cancelation calls recently.”

Since Pyongyang began its new round of threats against Seoul and Washington in March, tourists who planned to feel the beginning of spring season on Baengnyeong, the northernmost area in the Yellow Sea, have stopped visiting.

Temporary military aggressions have always existed in the past, but the first time that high level tension between North and South has continued for the better part of a month.

“Baengnyeong Island is a beautiful and peaceful area which is always protected by strong marines,” said Park Dong-seok, 52, owner of the Baengnyeong Culture Tour. “We ask people to visit the island.”

Tourist season generally begins in March. Many types of tourists, including people from rural areas, come to the island.

The city government thought last year that the island finally overcame the Cheonan warship tragedy, but the situation has worsened this year.

The Incheon city government has designated the year as “Visit Five Islands in the Yellow Sea Year” to recharge the tour industry. In Baengnyeong Island, for instance, about 60 percent of the island’s 5,400 residents are involved in the tour businesses.

But since Kim Jong-un, the Pyongyang leader, appeared at a naval base in the Yellow Sea in mid-March, owners of restaurants, hotels, motels and tour agencies have been busy not with accommodating tourists, but receiving a large number of cancelation calls.

“About 3,000 reservations have been canceled at accommodations, rent-car services and restaurants,” an official on Baengnyeong said.