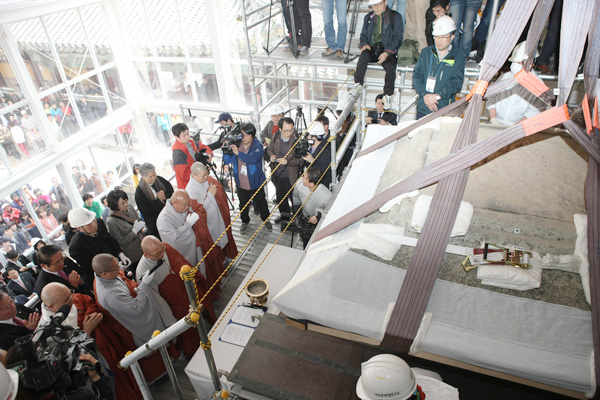 People gather to witness the removal of the caskets that allegedly contain Buddha’s sarira at the Three Storied Stone Pagoda at Bulguk Temple in Gyeongju, North Gyeongsang. [NEWSIS]

The core of the eighth-century Three Storied Stone Pagoda in the Bulguk Temple (also called Bulguksa Temple) here was unveiled for the first time in almost 50 years.

As part of the ongoing, wholescale restoration of Korea’s National Treasure No. 21, a group of caskets containing what is alleged to be Buddha’s sarira and placed in the middle of the pagoda was removed in a special ceremony yesterday afternoon. 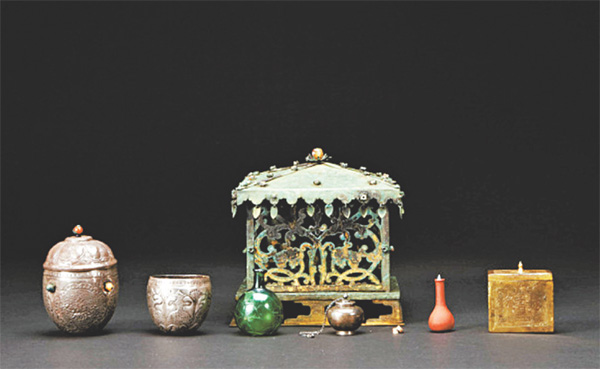 A set of caskets - made of materials such as silver, glass and wood - contain sarira. Most of them are at the Central Buddhist Museum. Provided by the Cultural Heritage Administration

The 8.2-meter-high (27-foot) pagoda, better known among Koreans as Seokgatap, is one of the most beloved and famous pagodas in Korea and considered by art historians as the essence of the Silla era (57 BC - AD 935) art and culture with minimalistic aesthetics and balanced composition.

The ceremony was attended by dignitaries and religious leaders such as Byun Young-sup, the newly-appointed head of the Cultural Heritage Administration and Kim Young-won, the director-general of the National Research Institute of Cultural Heritage.

The mood at the ceremony was both solemn yet chaotic.

From left,The stone on top of the caskets is removed, Officials attempt to keep the humidity level the same as before when removing the caskets,A square-shaped hole was created at the middle part of the pagoda to place a set of caskets. Provided by the Cultural Heritage Administration

It was solemn because before removing the part of the stone that was placed over the body of the pagoda in which the casket laid, a Buddhist ritual was performed, attended by dozens of respected monks in Korea.

And during the entire process - which lasted more than two hours - a Buddhist chant was played.

And so is the ongoing restoration that began in May 2011. It was initiated after officials spotted many cracks in the pagoda during a regular inspection and concluded that it was not safe to leave it as it was. 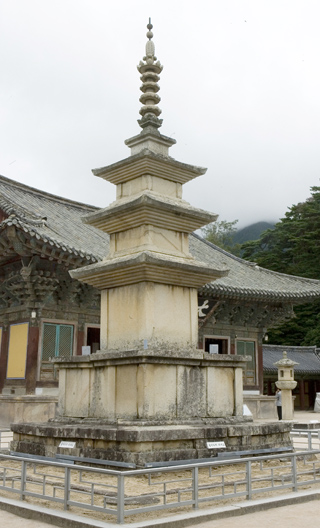 The pagoda before the restoration, which began in May 2011.[JoongAng Ilbo]

“We will finish dismantling the pagoda within the first half of this year, and design the reconstruction in the second half,” Kim, the director-general of the National Research Institute of Cultural Heritage, said at the ceremony. “And we will spend the next year completing the restoration.”

The mood was chaotic because many officials, journalists, onlookers and Buddhist believers flocked to witness the historic moment in a confined space. The pagoda is surrounded by glass, so that the 2.5 million visitors who visit the temple every year can see the restoration process.

Many were curious and wanted to get a glimpse into the casket or possibly the sarira - as it is a rare opportunity in one’s life. “According to the document placed inside the pagoda in the 1038 restoration, a total of 47 pieces of sarira were put inside that year,” said Bae Byeong-seon, the head of the architectural heritage division of the National Research Institute of Cultural Heritage. “However, when we recovered the caskets in the 1966 restoration, we found a total of 48 pieces of sarira.”

However, until now it remained a mystery as to how many pieces of sarira were put inside in 1966. A monk at the temple mistakenly broke the glass bottle that contained the sarira and thus it is uncertain as to how many pieces ended up in the pagoda. The exact format, size, materials and the numbers of the caskets also remained unclear. Officials cite as reasons the lack of documentation and systems in the restoration process at the time.

Officials said they were unable to determine exactly how many pieces of sarira were removed during yesterday’s ceremony. The pieces will be examined further in the coming days.

It is said Buddha’s disciples retrieved 84,000 pearl-like sariras after his body was cremated and that they were stored in pagoda-shaped shrines. After his death, they were sent to different parts of the world to promote Buddhism. The Silla Dynasty of Korea - known for its artistic and cultural freedom and achievement - was known for its particular devotion to Buddhism.

Cultural heritage officials said they have yet to decide whether they will return the sarira to the pagoda after the restoration is completed in 2014. In the meantime, it will be placed in a structure in the temple, which is also planning special ceremonies for Buddhist believers.

Experts say the charms of the Silla pagoda are that it’s simple and minimalist, with no carvings along the body or the stereobate, giving it a simple yet solemn feel. Also, the proportions are quite stable and beautiful. It is the oldest pagoda in Korea that used only one piece of stone and later became the prime example for pagodas of the Unified Silla Period that ensued the Silla period.