Bank of Korea at a crossroads

Bank of Korea at a crossroads 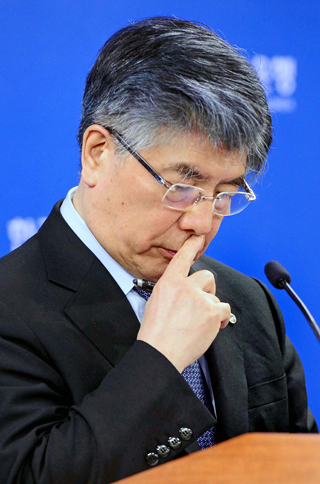 “If the Bank of Korea sends the impression that it shares its destination with the governing power, the market will get jittery. That would be unfortunate.”

“The Bank of Korea should get in line with the government’s efforts to reinvigorate the economy through cuts in benchmark interest rates and increases in the cap on bank loans to small- and mid-sized companies.”

The two comments come from a contrasting perspective on the role of the central bank and its sovereignty. The former, made on April 22, 2010, is a censure against the Bank of Korea for losing its sovereignty by allowing it to be swayed by government influence and orders. The latter, made on April 1, 2013, demands the central bank do the opposite by matching the government with monetary policies to help resuscitate the economy.

Surprisingly, however, both comments were mouthed by one person - Lee Hahn-koo, floor leader of the ruling Saenuri Party. He often advocated for the central bank’s independence in the past. He defended the former Bank of Korea head Lee Seong-tae when he came under attack by the Lee Myung-bak administration in early 2008, and did the same for the incumbent head Kim Choong-soo when he was first inaugurated in 2010. But lawmaker Lee’s recent comment overturns his past stance.

Ever since the global financial crisis, central banks around the world have been challenged in their duties and powers. Bankers debated on the theme in the Bank for International Settlements in 2010. Upon the theory that the central bank’s role should expand beyond the conventional monetary policy-setting authority, Bank of Israel Governor Stanley Fischer argued strongly against it. The renowned economist is now touted as the next chief of the U.S. Federal Reserve Board. How the independent role of the central bank will evolve is uncertain now.

Lee’s comment will likely spark similar debate on the role of the central bank. Lee’s status in the ruling party also adds gravitas to the argument.

Finding itself under attack, the mood at the Bank of Korea has changed. Eyes are on the current head and whether he takes up the hawkish style and tone of his predecessor Lee. The two have fiercely opposing images: Lee was strong on fighting on his side of the axis and Kim stubborn against volatility.

Former head Lee visited the Group of 20 meeting of finance ministers and central bankers in South Africa in November 2007. He went on a tour of the False Bay on the country’s extreme southwest tip after he completed his business affairs. The shores are famously rocky and mountainous, making it hard to decipher their direction. It is how the area got the name “False.” But after studying the sun and coastal lines for a while, Lee precisely pointed out where north lie.

A fan of astronomy, Lee likes to study the stars wherever he goes. His work ethics do not deviate far from his hobby and habits. He studies the state of affairs, sets goals and follows the direction. His conviction assures confidence, but nevertheless is hard to bend and respond quickly to changing conditions. That, of course, has led to constant clashes between the Bank of Korea and the government in responding to the shock wave from the global financial crisis in 2008.

But incumbent head Kim works differently. He is sharp in reading the external weather and moves fast in response. In whatever role given, he works hard to adapt to it.

When he was the chief presidential secretary on economic affairs to President Lee at the beginning of the term, he wore a sharp wristband to wake himself up during late hours at the office. The scars on his wrist underscore his workaholic nature. While serving as the envoy to the Organization of Economic Cooperation and Development, he whipped his staff hard. After becoming the head of the central bank, he often drove himself to work on weekends.

He has maintained a favorable reputation in all of his titles as head of a university and a think tank, chief presidential secretary on economic affairs and envoy. The only criticism was his close ties to the government after he said the Bank of Korea is in essence a part of the government before taking up the top post at the central bank.

He has gone through a lot, but nevertheless would be provoked by the ruling party floor-leader’s recent comment. He may have to borrow the hawkish and non-compromising style of his predecessor to protect the independence of the central bank.

In the past Bank of Korea Law, the head was required to be “a character of high standards and rich experience in finance.” The provision was removed in 1997, but the spirit lives on in the central bank. We expect to witness the same backbone in Kim.