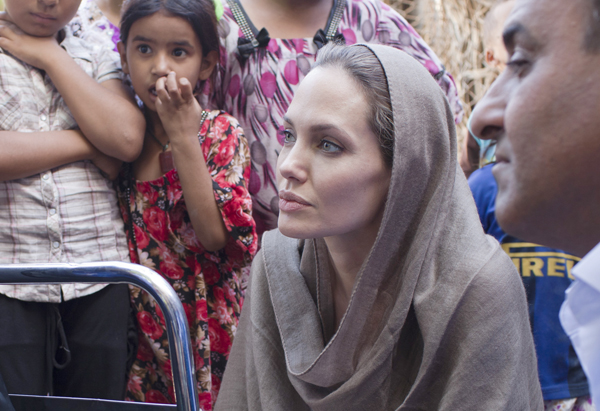 LOS ANGELES - Angelina Jolie has opened another girls school in Afghanistan and plans to fund more from the proceeds of a jewelry line going on sale this week that she helped to design, celebrity Web site E! News reported on Monday.

Jolie, a goodwill ambassador for the United Nations High Commissioner for Refugees, funded the girls-only primary school in an area outside Kabul that has a high refugee population, E! News said in an exclusive report.

The school educates 200-300 girls, E! said. It showed pictures of the school, which opened in November, and a plaque acknowledging Jolie’s contribution.

Jolie also funded a girl school in eastern Afghanistan that opened in 2010, according to the UNCHR.

Jolie’s representatives did not return calls for comment. E! said that Jolie plans to pay for more schools by selling a “Style of Jolie” jewelry line that she helped create with jewelry maker Robert Procop. He designed the engagement ring given to the actress by her partner Brad Pitt in April 2012.

“Beyond enjoying the artistic satisfaction of designing these jewels, we are inspired by knowing our work is also serving the mutual goal of providing for children in need,” Jolie was quoted as telling the Web site.

Procop’s Web site said the “first funds from our collaboration together have been dedicated to the Education Partnership for Children in Conflict [founded by Jolie] to build a school in Afghanistan.”

According to the Style of Jolie Web site, the newly expanded collection includes versions of the black and gold necklace that the actress wore to the premiere of her 2010 movie “Salt,” a pear-shaped citrine and gold necklace, and rose gold and emerald tablet-shaped rings, earrings and bracelets. No price details were released.

The jewelry will go on retail sale for the first time on April 4 through Kansas City jewelry store Tivol, Tivol said.

Procop told E! that it was “an honor to have the opportunity to be part of creating this line with Angie, as we both believe every child has right to an education.”