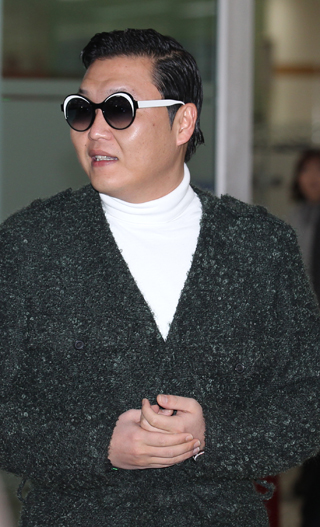 Psy unveiled the title of his new song “Gentleman” during an MBC evening news program on Tuesday.

The star first thought of naming his new single “Assarabia,” a Korean phrase often used to express excitement, but changed the title and some lyrics to make them easier for foreigners to pronounce.

In a prerecorded interview, Psy said that he had modified the piece as early as that morning.

“It is a very exciting song,” said Psy.

“I can’t say too much about the dance, but it is an adaptation of a dance move that every Korean knows but foreigners don’t.”

The piece will be unveiled at a concert in Seoul on April 13, though Korean fans will get access one day earlier.

Psy and his agency said the special treatment for Koreans should ensure that every audience member is able to enjoy the concert to the fullest.

Psy will then go to the United States and visit Europe in May before moving onto other Asian countries.