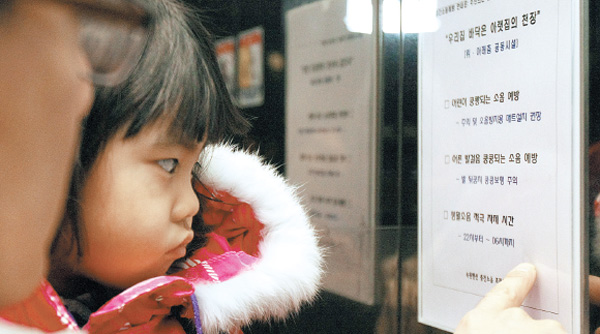 A father and child look at a notice with the slogan “Your floor is your neighbor’s ceiling” and some tips to reduce noise at their apartment building in Daegu. [JoongAng Ilbo]

When Cho Hyun-seok, a rank-and-file employee working at an engineering company, found a spacious and sunny apartment among the concrete slabs in Gaebong-dong, southwestern Seoul, 18 months ago, he wasted no time in signing a two-year contract with his landlord.

Aside from the tough housing market, there was another factor that made the 37-year-old sign on the dotted line without a second thought. The new apartment was located on the 25th floor at the top of the building.

“I thought to myself, ‘At least, no one will annoy me with noise from the apartment above,’?” Cho said. “The tramp of a man who lived directly above me was really loud so my wife and I always knew whether he was in the living room or out of the house. I asked him to walk quietly one night, and moments later, he came and beat my door while swearing for 10 minutes. It was past midnight.”

In the end, Cho’s confrontation with his neighbor lasted just minutes and he was eventually able to escape to a new building, but others haven’t been so lucky.

A number of high-profile cases have awakened the nation to the problems of apartment noise and its potentially violent implications. 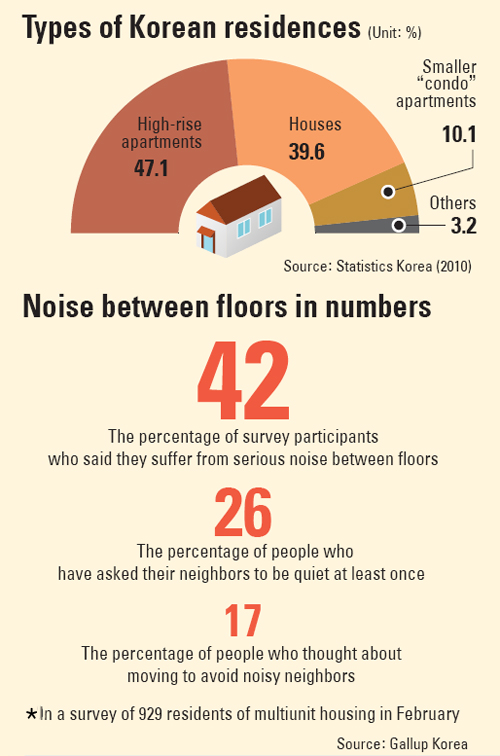 Last month alone, two men, one living in Busan and the other in Daejeon, were arrested for stabbing noisy neighbors.

During the Lunar New Year holidays, a man killed two brothers visiting their parents after an argument over noise in Seoul and another man threw a beer bottle filled with gasoline into a noisy neighbor’s living room in the southwestern part of the city.

The seriousness of these incidents has suddenly caught the public’s attention, and people are now starting to notice the noise problem some 50 years since the first apartments were constructed in the country.

“People used to think of the issue as one for those who were super sensitive or neurotic, but it has surfaced as a public issue over the last two or three years,” said Cha Sang-gon, head of House Culture Research Institute, a private organization focused on victims of apartment noise.

The issue seems ripe for a solution as 57.2 percent of Koreans lived in multiunit residential buildings such as apartments and condos as of 2010, and many suffer from the plague of noise.

In a recent Gallup Korea poll, 42 percent of residents in such buildings said they were bothered by noise from neighbors, and of those, 60 percent were willing to pay 10 million won ($8,975) to be rid of the issue.

The problem is so severe that some even take the side of the noisy neighbor murders as they sympathize with the stress that disturbances at home can create.

What turns neighbors into monsters?

Korea’s very first apartment building was constructed in 1962 in Mapo District, western Seoul, to a mixed reception. Without front yards to bury kimchi and other fermented everyday staples, these enormous structures were inhuman spaces for many, according to Valerie Gelezeau, a French author and geographer who published “Apartment Republic” in 2007.

Yet people quickly came to adopt the new way of living as low-rise buildings were replaced with high-rises when government programs increased demand for new dwellings. In particular, the bunyang lottery system allowed people to purchase apartments at a discount before they were even built. 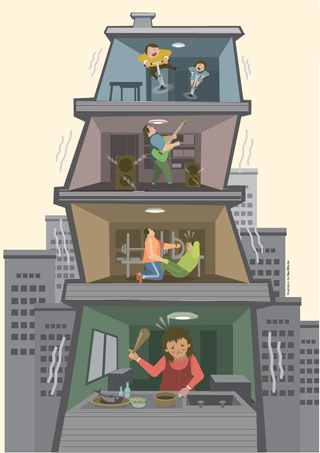 The pace of change left Koreans with little time to adapt to such a dramatic shift in living conditions, according to one expert.

“Koreans were not ready to embrace apartments when they first arrived because we used to live in ondol [traditional, floor-heated] homes and had little knowledge about high-density housing,” said Lim Chang-bok, a professor of construction and engineering at Sungkyunkwan University.

The lack of preparedness also applied to government regulators, who seemed ill-prepared to deal with the surge in apartment buildings. Building codes and apartment rules designed to limit noise - par for the course in developed nations - were nearly nonexistent in developing Korea.

“We just had a simple declaratory rule about noise between floors. It simply read that residents shouldn’t be exposed to noise,” said Min Gyeong-cheol, an official at the Ministry of Land, Infrastructure and Transport.

Without the government watching, construction companies had no reason to use extra concrete between walls and floors. They routinely made buildings with just 12 or 13 centimeters (4.7-5.1 inches) of concrete between floors.

And as housing prices have risen in recent years, apartment residents have more invested in their homes and are more sensitive to disturbances there.

A rallying cry for those who sympathize with the noise murderers is that they probably slaved away for years before being able to rent or purchase apartment units of their own.

Figures back up the claim that simply getting an apartment has grown increasingly difficult over the years.

According to a report that was published in 2010 by Budongsan Bank, a local real estate consulting agency, an ordinary employee would have to work for an average of 56 years and six months to save up enough to buy a 109-square-meter (1,173-square-foot) apartment in Seoul. That time period increases to 89 years and eight months for units in Gangnam District, a well-to-do area in southern Seoul.

Even without spending a penny of their monthly paychecks on food or rent, average workers would still have to save for 12 years and two months to purchase an apartment in Seoul.

And residents have been left to suffer from noisy neighbors in their hard-earned sanctuaries, a problem that can lead to psychological issues and the recent violent incidents.

“When an ordinary person is exposed to continuous noise, they can develop a mental illness or other psychological disorder,” said Lee Na-mi, a psychiatrist who runs a clinic in Seocho-dong, southern Seoul. “In addition, they are bound to run across their neighbors everyday. It worsens their relationship with neighbors.”


Working hard to find a fix

Fed up with the problem and perhaps fearful of violent reprisals from neighbors, apartment residents eventually took matters into their own hands. They started filing lawsuits against builders for shoddy construction in early 2000s, leading the Land Ministry to begin working on new regulations from 2005.

Light-frame construction is quite popular in Korea - making up 80 to 90 percent of projects in the country - due to its low cost and is the method used to create the majority of cookie-cutter concrete buildings across the country. Such dwellings are especially vulnerable to noise complaints, so the government required that their floors be 21 centimeters thick.

In the more noise-resistant and expensive column-type buildings that make up just 2 to 3 percent of housing, floors had to be 15 centimeters thick.

If construction companies chose not to meet those requirements, then either building type had to absorb at least 58 decibels of light noise and 50 decibels of medium noise.

Light noise may be generated by an object falling onto the floor while medium noise could be deep and heavy sounds such as walking or jumping.

Faced with renewed attention to the noise issue in light of violent attacks and other issues, the Land Ministry again beefed up its rules in amendments expected to take effect next year.

Floors in all buildings will be required to be at least 21 centimeters, enough to absorb at least 58 decibels of noise. In addition, all new public apartments will be built in the column style specifically to absorb noise.

Unlike foreign countries such as the United States and the United Kingdom that detail forbidden and restricted activities in multiunit residential homes, there have been no such regulations in Korea until now.

A small community has also formed to provide resources for those with noisy neighbors.

For instance, Korea Environment Corporation, an organization affiliated with the Ministry of Environment, employs five counselors who receive up to 90 calls per day at the Yiutsayi Center. Yiutsayi roughly translates as “neighbor relationship.”

“If you complain about noise late at night, it might worsen your relationship with your neighbors. So we give them tips on how to cope with noisy neighbors such as leaving notes on their doors,” said Lee Seon-kyu, who is in charge of the center.

When a situation grows worse, counselors and other employees of the corporation can visit troubled neighbors and arbitrate disputes.

“The center is run by a small staff, but we take pride in what we are doing because there were no official centers offering people help in these situations. I think we are like haewooso for them,” Lee added, referring to a traditional place where people would go to relieve stress.

And as more and more people voice concerns about quality of life in multiunit buildings, the House Culture Research Institute has started lending portable devices that can measure the level of noise for 15,000 won ($13.50).

Gearing up for a long road ahead

Yet despite the solutions in the pipeline, experts said that apartment residents should not expect any dramatic changes in their daily lives for the time being.

“The soon-to-be revised construction law [regarding floor thickness] will bring us definite changes, but the thing is the law only applies to new apartments that will be built the year after next and beyond,” said Jeong Jin-yeon, a senior researcher at Daewoo Institute of Construction Technology.

“Apartments that were built around 2008, after the 2005 revision in the law, have far fewer problems when it comes to noise between floors. But there are problematic apartments that were all built before 2005, and there is no way to fix the problem at a myriad of apartments because they won’t be demolished for a while.”

Cha Sang-gon, head of the House Culture Research Institute, also took a less-than-optimistic view. “It is an issue we can’t avoid as long as we live in apartments,” he said bleakly.

And yet, whether for their efficiency or lack of better options, Koreans aren’t likely to give up their love affair with high-rises anytime soon.

Nearly 19,150 families moved into new apartments this month alone, according to real estate consulting agency Budongsan Serve - an increase of 3,659 from a year ago.