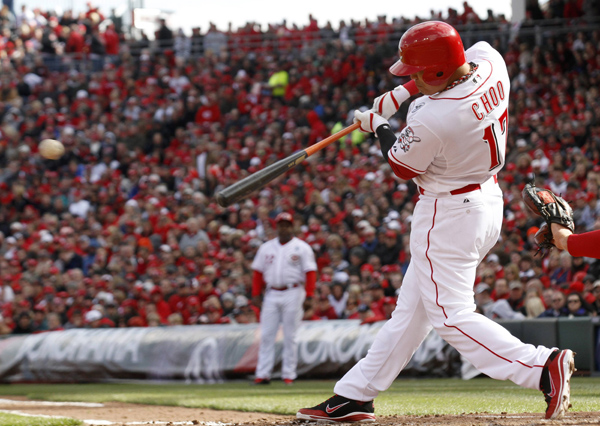 Choo Shin-soo of the Cincinnati Reds hits a double against Los Angeles Angels pitcher Jered Weaver during the third inning of their interleague baseball game Monday at Great American Ball Park in Cincinnati, Ohio. Choo, a former Cleveland Indians player, had two hits in his debut game for the Reds. [REUTERS/NEWSIS]

CINCINNATI, Ohio - In a game so long that everything became blurred, catcher Chris Iannetta had one thing clearly in mind when he dug in for his final at-bat.

He didn’t. Iannetta singled with the bases loaded in the 13th inning Monday, sending the Los Angeles Angels to a 3-1 victory over the Cincinnati Reds in an opener that set a few records and emptied both bullpens and benches.

“Not what you script for the first day going on,” said Iannetta, who caught all 13 innings.

This one was a fitting follow-up at the other end of the state. And Iannetta was in the middle of it.

He hit a solo homer in the third inning off Johnny Cueto, then grounded out and struck out three times, including with the bases loaded in the seventh inning to keep it tied at 1.

“It was a long day at that point,” Iannetta said. “I’d had some pretty forgettable at-bats. I was just trying not to strike out.”

Hoover walked two and hit Hank Conger - the Angels’ final position player - to load the bases with two outs. Iannetta worked the count full, fouled off a couple pitches, then singled to left.

With that, the Reds were headed to a loss in their longest season opening game since 1975, when they beat the Dodgers 2-1 in 14 innings.

Choo Shin-soo had a solid debut at the Reds’ leadoff hitter, reaching three times. He doubled in the third and came around on a groundout and Weaver’s wild pitch.

In Los Angeles, Clayton Kershaw launched his first career home run to break a scoreless tie in the eighth inning before finishing off a four-hitter Monday that led the Los Angeles Dodgers over the defending champion San Francisco Giants, 4-0?.

Kershaw became the first pitcher to throw a shutout and hit a home run in an opener since Bob Lemon for Cleveland in 1953, according to STATS.

“What an awesome feeling,” said Kershaw, who charged around the bases accompanied by a prolonged roar from the sellout crowd of 53,000. ?

Kershaw struck out seven, walked none and retired World Series MVP Pablo Sandoval on a grounder to end it. His curveball was particularly effective in his sixth career shutout.

“I was able to throw it for strikes, which is key,” he said. “That made it easier for them to chase. They were swinging early in counts.”