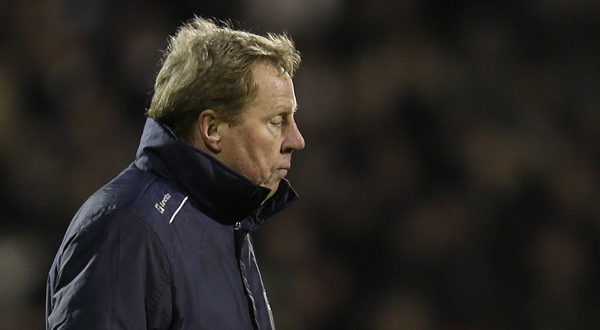 Queens Park Rangers’ manager Harry Redknapp walks off the pitch toward the dressing rooms after the English Premier League match between Fulham and Queens Park on Monday at Fulham’s Craven Cottage stadium in London. Fulham won the match, 3-2. [AP/NEWSIS]

LONDON - Fulham withstood a fierce fightback from the Queens Park Rangers to beat their west London rivals, 3-2, on Monday and push Harry Redknapp’s side closer to Premier League relegation.

Dimitar Berbatov’s double and an own goal put the hosts up 3-0 in the first half but the Rangers, adrift in the bottom three, stormed back and the home team was forced to cling on after midfielder Steve Sidwell was sent off 11 minutes from time.

Two errors from Rangers center back Christopher Samba, signed for an undisclosed club record fee from Anzhi Makhachkala in January, helped Berbatov fire 10th-place Fulham into a two-goal lead midway through the first half.

Samba tripped Ashkan Dejagah just inside the box and Berbatov scored from the penalty spot after eight minutes.

The Bulgarian doubled Fulham’s advantage with his 13th league goal of the season after Samba dwelt in possession on the edge of his own area and the former Manchester United striker seized on the loose ball to shoot past keeper Julio Cesar.

Samba was not the only Rangers defender to suffer, Clint Hill putting through his own net at 41 minutes when John Arne Riise’s cross hit him and flew in.

Adel Taarabt gave the visitors a lifeline with a well-taken goal just before halftime and soon after the restart Loic Remy’s penalty, awarded after Taarabt was tripped by Giorgios Karagounis, was saved by Mark Schwarzer.

Remy quickly made amends when he smashed the ball home just minutes later from Stephane Mbia’s through ball and the Rangers had other chances to take at least a point after Sidwell was shown a straight red card for a rash challenge on Armand Traore.

The Rangers, who have seven matches to play, are seven points adrift of safety. They remain 19th on 23 points, the same as bottom club Reading.

Aston Villa are 18th on 30 points with Wigan Athletic just above the relegation places, also on 30 having played one game fewer.