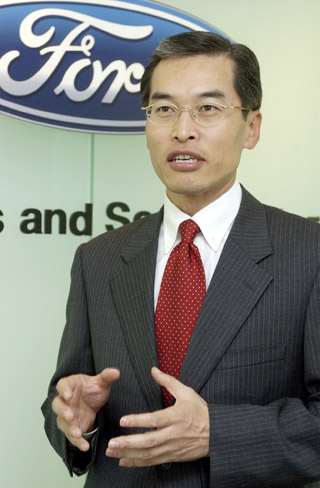 Ford Korea President and CEO Jung Jae-hee could be the busiest man in the imported car industry.

Jung has been working for Ford Korea since 1992 and is considered a doyen of the imports industry. Last year, he added another position on his resume: chairman of the Korea Automobile Importers and Distributors Association, or Kaida.

As Ford was cruising to become one of the top five best-selling brands in the first two months of this year, the Fair Trade Commission launched an investigation into some imported brands and Kaida in February over price manipulation and unfair distribution systems for spare parts.

With his slim suit, Jung gives the impression of a fashionable gentleman. But the 53-year-old may not be so “gentle” when it comes to business.

When asked about competition for Ford from other brands, his response is, “Bring it on!” And he’s confident the FTC will find no wrongdoings in its investigation.

In an interview with JoongAng Ilbo during the 2013 Seoul Motor Show on Friday, Jung cited Ford’s EcoBoost engine technology - which reduces CO2 emissions without sacrificing power - for the automaker’s recent sterling performance in the Korean market.

“We advertised on a large scale [the EcoBoost engine] since last July and we will put more money in this year,” Jung said.

According to Jung, the Korean market was once considered just one market among many by Ford headquarters. But since the nation’s imported auto market grew sharply, taking 10 percent of domestic passenger car sales last year, the American automaker now see its potential.

“For this year, we are trying to focus on the Lincoln to establish a new premium brand,” Jung said. “We will also try to get customers to experience EcoBoost engine-equipped Fusion or Escape.”

Jung said sales of foreign cars will continue to grow as consumer’s preference for diesel cars increases and the price gap between local cars narrows. But the speed of the growth might decline somewhat from the past few years.

The FTC recently launched an investigation into possible collusion and other wrongdoings in the imported car sector. Jung said the industry doesn’t mind because the FTC is just doing its job.

“We are in a competitive industry, and there is no reason for Kaida or companies to indulge in such wrongdoings,” he said. “I personally think the FTC is wasting its time.”

Jung said that the imported car industry has been considering many ways to contribute to society.

Kaida will host a job fair this Friday and Saturday during the Seoul Motor Show at Kintex in Goyang, Gyeonggi. More than 30 imported car dealers or companies will join the event to offer jobs.

Jung said that the industry is now looking forward to the next stage of reaching market share of 20 percent. He said each company needs to bring in products that match the tastes of Korean consumers, and it is also important to bring in an advanced automobile culture.

“As imported cars get competitive here, Hyundai and Kia will also have to focus more on the local market,” he said. “Eventually, this will broaden the choice for consumers.”