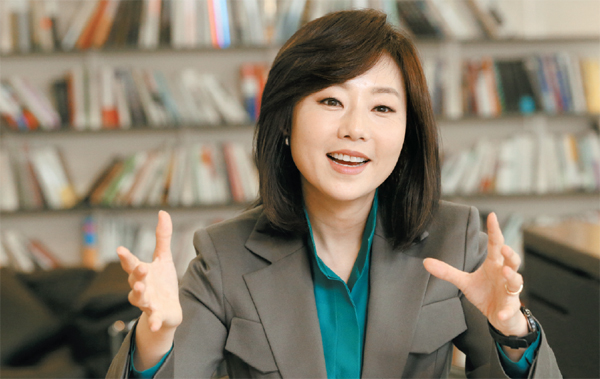 Men who have to serve the mandatory military service and women on maternity or child care leave both deserve respectful treatment, according to new minister of gender equality and family, Cho Yoon-sun, one of two women cabinet members under Korea’s first woman president.

On March 11, the 47-year-old Cho was chosen as the youngest minister appointed by President Park Geun-hye, for the Ministry of Gender Equality and Family.

Cho previously was an attorney at top law firm Kim & Chang, vice chairwoman of Citibank’s Seoul office and proportional representative in the 18th National Assembly. She also was Park’s transitional government spokeswoman. She graduated from Seoul National University and received a master of laws degree from Columbia University.

“It is a large burden to look down the road five years and think, ‘There has been this much improvement’ after having a female president,” said Cho, who has two daughters.

“The Ministry of Gender Equality and Family doesn’t have a lot of manpower, but it has a wide spectrum of tasks. I want to be evaluated on my job,” said Cho as she sat with the JoongAng Sunday on March 21 for an exclusive interview.

Q. What is the background of how you became appointed the gender equality and family minister?

A. The president said during a cabinet meeting, “I have thought of each and every cabinet member for a very long time. What kind of work you will do in this seat, whether you will do a good job .?.?. Take into consideration these feelings.” When she called me, she said, “We have gone a long way together, so you know well what work I want to achieve and how important I consider the Ministry of Gender Equality and Family.” The previous day, the Gender Equality Ministry reported its policies to the transition team, and the president asked what I thought of it. “I didn’t realize how scattered policies on women were across all divisions. It seems like the task is to coordinate with the different departments,” I told her, and she responded, “Good observation. Instead of getting caught up in the momentum, work proactively as the coordinator of all the departments.”

Isn’t it true that you don’t have a lot of experience in women’s policies?

There is a lot of criticism that I do not have expertise in women’s policies. My [women’s policy expertise] comes from my experience. That said, I will listen that much more carefully to experts and form policies without prejudice and set forth policies that will be welcomed in action rather just on paper.

At the press conference after your appointment, you stated that the compensation for soldiers’ time spent in military service has to be further discussed?

I am a mother of two daughters, but in the perspective of a mother with sons, I think it can be seen that in a time when the son should be studying, they are spending their precious time in the army and also face difficulties with employment. Ultimately, the Ministry of Gender Equality and Family tries to enable women to live harmoniously. Consideration of men serving time in military service is like consideration for mothers in the workplace for maternal leave or child care. This is a position the ministry has continued to maintain. The relevant branch (Ministry of National Defense) will have to draw from the public how to handle this issue in the future. Accepting military service as work experience is something that I personally proposed and was debated during the transitional government period.

Can you elaborate on the policy of subsidizing grandmothers who take care of their grandchildren with payments of 400,000 won ($359) per month?

The press prematurely reported on the policy when only the draft measure was completed. The transitional team discussed expanding nanny businesses, dispatching child care instructors and having housekeepers that can do double duty and also take care of kids, which was what the general public wanted. Compensating grandparents who take care of their grandchildren also has been practiced in Gwangju and in Seocho District in southern Seoul to lots of favorable responses. But there has to be a discussion of how to prevent corruption in this method and it has not been decided yet when the policy would be implemented.

Are you going to maintain the “Shutdown” policy (to prohibit children under 16 from playing computer games between midnight and 6 a.m.)?

It is important to consult with the public. As the Shutdown Act became known, the number of children who gamed in the middle of the night has decreased. Addiction to mobile gaming has not yet been determined to be extreme, and every two years we will be monitoring what kind of gaming we need to prohibit.

What are some things you want to work on?

We need to consider how to encourage corporations to enable more flexible working environments, shorter work hours and longer maternity leave, such as being able to work from home through telecommuting. We will carefully examine what sort of benefits overlap and what is lacking from the beginning.

Of the 18 members of the cabinet, only two are women. And none of the 12 top Blue House aides are female.

I believe the president will gradually increase the female ratio. She has a strong will to select female talents. [In the April by-elections last year] when the female proportional representative was nominated, she selected a groundbreaking number of people with expertise. For the transitional team, she said at least twice that she wanted “at least 40 percent of the people on the committee to be female.” I have heard that organizational committees are trying to match that ratio and many recommendations are coming in. There is a personnel database which keeps track of government institutions that select female employees. Currently, there are only 30,000 female employees, so we are looking to recruit 70,000 more.

Some men declare it is difficult to serve a female president.

Because the circumstances are that the method of communication is skewered in the interest of men. I, too, have much experience where I worked in an environment where I was the minority as a woman, and even though it felt unnatural I had to adapt to the circumstance. It doesn’t seem like a male boss took into consideration how to treat a female subordinate to let her feel more at ease, but now that a female president took office, the method of communication becomes a point of concern. It is the start of growing pains and change. In my experience, after difficulties working with male bosses before in contrast with after President Park took office, communication has become easier, as if words are not needed to convey the thoughts. Other female representatives and those in the transition team also feel that. Five years later, I wish that there will be an all-round environment where males and females can communicate naturally.

What aspects of President Park make it easy to work with her?

If I tried to consult something with a male party representative, the more difficult the problem, he would more likely respond, “Do what you want.” On the other hand, if you ask a difficult or ambiguous question to President Park, she would respond, “It may seem trivial, but the nuance is important,” and consult about the problem with me in a friendly manner.