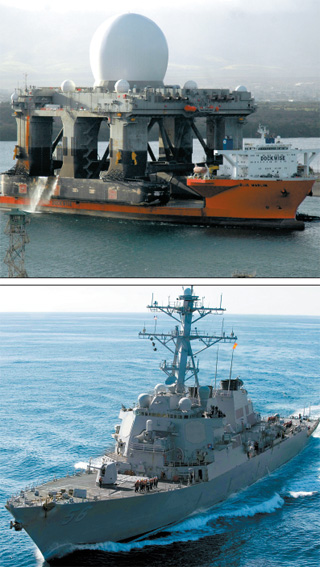 International media reported yesterday that the U.S. Navy sent the sea-based X-band radar, known as the SBX-1 (top), to the waters near the Korean Peninsula. It is known for its missile-tracking capabilities. Media also reported that the U.S. Navy also moved the USS John S. McCain (above), a destroyer capable of detecting and intercepting North Korean ballistic missiles, from a port in Japan to Korea. [NEWSIS]

The United States continues to respond to relentless saber-rattling by North Korea by deploying a guided-missile destroyer and a floating radar system to the waters off the peninsula.

The U.S. Navy moved the USS John S. McCain, a destroyer capable of detecting and intercepting North Korea’s ballistic missiles, from a port in Japan and sent it to Korea, international media reported yesterday. The 154-meter (505-foot) destroyer is armed with the Aegis ballistic missile defense system and advanced radar systems.

Other reports including one by CNN said the Navy also sent the sea-based X-band radar, known as the SBX-1, to the area. Renowned for its capability of tracking missiles, the mobile radar station is a key part of the ballistic missile defense system of the Pentagon.

The deployments appeared to show Washington’s intention to make up for the shortcomings of South Korea’s defense systems against the North’s missile attacks.

The move came after North Korea threatened last week to strike U.S. bases on its mainland, in Hawaii and Guam as well as in South Korea.

At a White House press briefing on Monday, Press Secretary Jay Carney said no sign of unusual changes have been spotted in the North’s military posture despite its harsh threats. But Carney said Washington still takes the North’s bellicose rhetoric seriously.

The latest U.S. deployment of powerful arms to the Korean Peninsula appeared to be meant for both Pyongyang and Seoul to see.

For the ongoing Korea-U.S. joint military drills, the United States has sent long-range, strategic B-52 bombers, the attack submarine USS Cheyenne, stealth F-22 fighter jets and a pair of B-2 stealth bombers.

“The actions we’ve taken are prudent,” said Carney, “and they include, on missile defense, to enhance both the homeland and allied security, and other actions like the B-2 and B-52 flights, have been important steps to reassure our allies, demonstrate our resolve to the North, and reduce pressure on Seoul to take unilateral action. We believe this has reduced the chance of miscalculation and provocation.”

It was the first time that Washington said its display of arms was intended to dissuade Seoul from acting on its own.

On Monday, President Park Geun-hye ordered the South’s military to fire back without political consideration in case of a North Korean attack.

The South’s Ministry of National Defense also briefed the president that it was creating a “proactive deterrence strategy” so that the South Korean military would react to an imminent contingency without consulting U.S. forces by exercising its right to self-defense.