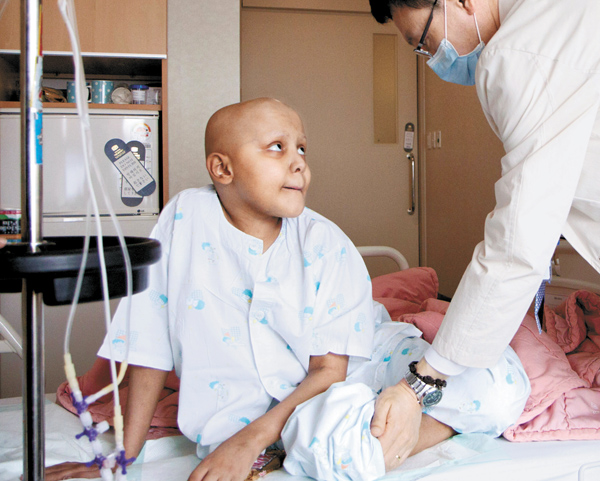 Mohamed Al Hadrami, an 11-year-old boy from the United Arab Emirates, receives hematopoietic stem cell transplantation at St. Mary’s Hospital in southern Seoul. The treatment costing more than 420 million won (376,740dollars) is expected to be the most spent by an overseas patient. Provided by St. Mary’s Hospital

The boy was visiting Korea to have hematopoietic stem cell transplantation at St. Mary’s Hospital in southern Seoul after being diagnosed with leukemia in July 2011.

The treatment has cost a whopping 420 million won ($376,740) so far and is estimated to reach 500 million won by the end of the treatment. This has become the highest amount spent by a single overseas patient in Korea.

Mohamed is part of a growing number of overseas patients who come to Korea for treatment after learning that the country has an ample number of medical specialists who are able to carry out sophisticated treatments for serious diseases like leukemia.

The number of foreigners who visited Korea for medical treatment constantly increased with the government’s efforts to boost “medical tourism” that were initiated in 2009.

Last year, 150,000 made their way to see Korean doctors, according to the Korea Health Industry Development Institute.

The total amount spent on hospital bills by overseas patients stood at 54.7 billion won in 2009 but increased to more than 200 billion won last year.

His case also shows a promising future for the Korean medical field.

“We were amazed when we heard that the transplant procedure is under way” said Mohamed’s mother, adding that it was impossible to receive such a transplant surgery back in Abu Dhabi.

The doctors at Seoul’s hospital said that the disease had spread too far when they spotted a cancer cell in his blood last year. The cancer cells were undetectable in Mohamed’s body after the doctors performed cancer treatment for three months.

They then embarked on hematopoietic stem cell transplantation in January with stem cells provided by the National Marrow Donor Program in the United States.

Along with the expertise of Korean professionals, relatively low costs compared to the U.S. and Europe also contribute to luring in those outside of Korea.

“If Mohamed underwent the same surgery in the U.S. the cost might have been twice as much as it is here,” said Jung Nak-gyun, a doctor overseeing Mohamed’s medical operation as well as a pediatric leukemia specialist at St. Mary’s Hospital.

The hospital began offering Halal food for those coming from the Middle East and prayer goods for the Islamic faithful.

The Samsung Medical Center in southern Seoul is also following suit to better accommodate patients from other countries. It provides such diverse cuisine as Middle Eastern, Russian, Mongolian and Greek.

While the local hospitals look to appeal to foreign patients, some experts point out that there is still room for improvement.