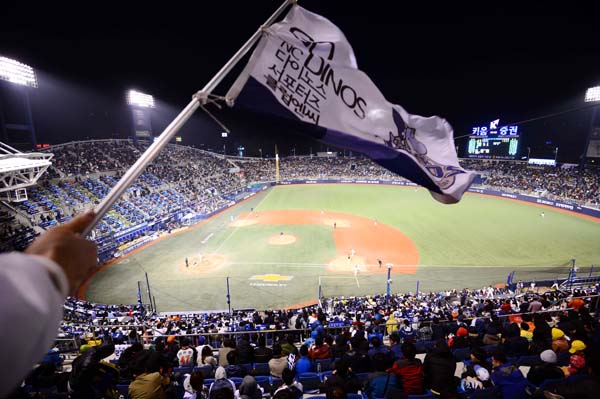 A sellout crowd ?watches the Lotte Giants’ 4-0 win over the NC Dinos on Tuesday night at Masan Stadium in Changwon, South Gyeongsang. [NEWSIS]

Lotte Giants manager Kim Si-jin was up in arms after the team’s 4-0 victory over the NC Dinos in Changwon on Tuesday night.

With the victory in the first matchup between the two southern-based teams, the Giants stayed atop the leaderboard of the Korea Baseball Organization with the Doosan Bears as the only two undefeated teams after the first three games. But Kim dismissed the significance of the early lead, saying that the team would get into trouble with the same mistakes that were made during Tuesday’s game.

“Winning is not the only thing. We are not supposed to play such a game,” Kim, who took the helm of the Giants in November on a three-year-contract, told reporters after the victory. “Such a victory is meaningless. There is a long way to go.”

At the game held at the Masan Stadium, the Giants committed three mistakes on sacrifice bunt attempts. The first one was made in the second inning by Pak Jong-yoon with Jang Sung-ho and Hwang Jae-gyun on second and first bases, respectively, with no outs. Park’s bunt was caught by third baseman Lee Hyun-gon, who threw out Hwang at first base. Then, Yong Deok-han was retired on a groundout to end the threat.

In the fifth, Yong’s bunt rolled into Dinos starter Adam Wilk, who then retired Park at second.

In the ninth, Moon Kyu-hyun’s bunt with Jeon Jun-woo at second base with no outs landed in front of Dinos closer Lee Tae-yang and Jeon was thrown out at third base.

“We can’t say enough about the importance of a bunt in a neck-and-neck game,” Kim, the former Nexen Heroes manager, said.

“The players should themselves think about how to implement a tactic. They need to improve.”

Park had three RBI, including a two-run homer.

Elsewhere on Tuesday, the Bears defeated the SK Wyverns, 7-3, the Heroes beat the LG Twins, 3-1 and the Kia Tigers beat the Hanwha Eagles, 9-5.