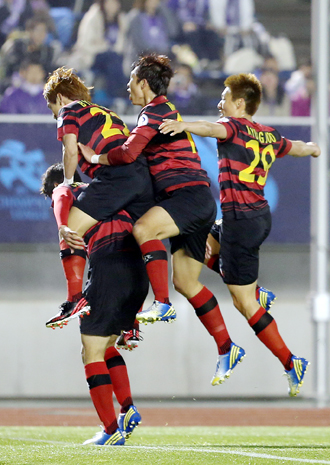 Pohang Steelers players jump on the back of Bae Chun-suk after the 22-year-old forward scored a goal in the first half of the game between the Steelers and the Sanfrecce Hiroshima at Hiroshima Big Arch on Tuesday night. The Steelers won 1-0. [NEWSIS]

Midfielder Choi Hyun-tae fought off a late surge from opponents and a 10-man FC Seoul kept its nail-biting 2-1 lead against Vegalta Sendai of Japan during an Asian Football Confederation Champions League game in Seoul on Tuesday.

“Both the players and I were embarrassed at facing such a situation,” Seoul coach Choi Yong-soo told reporters after the game. “That should never happen again.”

The hosts were up 2-0 in the 82nd minute when Seoul goalkeeper Yu Sang-hun was fouled out due to a situation with charging Sendai striker Wilson.

Choi, who already used up three replacement cards, had to pick one of the 10 players on the pitch and put him on the goal.

Choi Hyun-tae, a 1.78-meter (5-foot, 10-inch) midfielder, was his choice and quickly put on the goalkeeper’s uniform and gloves before allowing a penalty shot by Wilson.

Each of the remaining minutes were thrilling for Seoul and nearly 10,000 people watching at Seoul World Cup Stadium. Fans let out sighs of relief whenever Seoul defenders kept the opponents from advancing near the interim goalkeeper.

When Choi grabbed a cross from a Sendai player in the 88th minute, the crowd shouted his name. Five minutes of stoppage time ended without a significant threat from Sendai, and Choi Hyun-tae, who was put in at the 74th minute to replace Sergio Escudero, fell to the ground in relief after the final whistle.

Coach Choi said that Choi Hyun-tae, 25, was not a bad choice.

“I thought of entrusting the goal to Kim Jin-kyu considering his height,” the coach said, referring to 1.83-meter defender who scored Seoul’s second goal in the 21st minute. “But I thought Choi Hyun-tae was a more versatile player.”

Escudero, who previously played for Japanese club Urawa Red Diamonds for eight years, contributed to Seoul’s victory with a fifth-minute goal. With the victory, Seoul kept the lead in Group E, three points clear of Jiangsu Sainty of China, which beat Buriram United of Thailand 2-0 on Tuesday.

The Pohang Steelers won the other Korea-Japan match against the Sanfrecce Hiroshima 1-0 in Hiroshima on Tuesday. Bae Chun-suk, a 22-year-old forward, scored the 18th-minute winner.

The Steelers are now in second place in Group G, tied with Bunyodkor of Uzbekistan and Beijing Guoan of China with five points. Bunyodkor is ahead on goal difference.