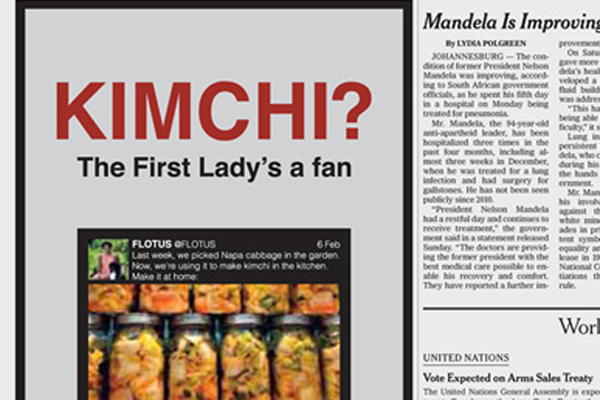 Michelle Obama has made an appearance in an ad promoting kimchi that was published in the New York Times on Tuesday.

The U.S. first lady, known for her efforts to promote healthy eating among Americans, made headlines in Korea in February after tweeting about the fermented cabbage dish.

“Last week, we picked Napa cabbage in the garden. Now, we’re using it to make kimchi in the kitchen,” she posted along with a photo of kimchi jars.

Seo Kyung-duk of Sungshin Women’s University took full advantage of that moment in the newspaper advertisement.

“Kimchi? The first lady’s a fan,” read the headline.

“The first lady has been helping America make healthy and delicious choices for years,” the ad continued. “So it’s no wonder she recognized the powers of kimchi.” This is Seo’s second advertisement in the New York Times. In February, Hallyu actress Lee Young-ae appeared in the paper to promote bibimbap.