Modern history in the eye of the beholder

Modern history in the eye of the beholder 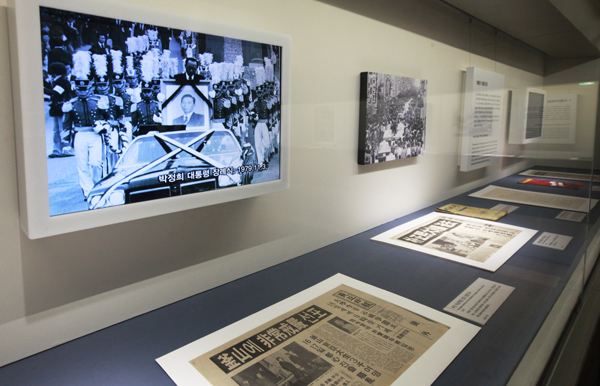 President Park Chung Hee is a large presence at the National Museum of Korean Contemporary History, which has been criticized for conservative bias. By Park Sang-moon

Tomorrow marks 100 days since the opening of the National Museum of Korean Contemporary History, the brainchild of President Lee Myung-bak tasked with evaluating events since the country first opened to the Western world in 1876. But instead of fanfare, the museum has found itself in a battle over Korea’s turbulent history.

Organizers have been attacked from all sides, especially for their treatment of events following World War II. Liberals contend that the exhibits lavishly praise conservative leadership such as the economic development achieved by Park Chung Hee while practically ignoring the downsides of dictatorship and pro-democracy movements.

Even history experts have criticized the museum’s rushed finish; its opening date was pushed forward several times as the Lee administration was drawing to a close.

They point to inadequate materials and simple failure to interest visitors.

In response, the museum has insisted that it is not “a memorial hall for certain presidents,” but the complaints aren’t likely to disappear anytime soon.

The controversy is the latest thorn in the side of President Park Geun-hye and her supporters, who have been plagued by issues of history since the presidential campaign.

In the run-up to the election, Park struggled to handle her association with her father, whose history of economic development is tainted with issues like oppression of dissenters. Time magazine called the president “The Strongman’s Daughter” and opponents urged her to apologize for her father’s misdeeds.

Since being elected, she’s been confronted with equally controversial issues about history textbooks and popular documentaries with widely varying interpretations of past events.

As interest in the country’s modern past continues to rise, it’s become increasingly evident that, at least to politicians, history is in the eye of the beholder - and historians are waiting to see how Park will weigh in.

The National Museum of Korean Contemporary History has now been open for 100 days. It has been widely criticized for its exhibits on industrialization (top right) and the pro-democracy movement (bottom right). Conservative leaders are largely credited with the former while liberals spearheaded the latter. By Park Sang-moon


The center of disagreement

Koreans’ disagreement about the days of former presidents Syngman Rhee and Park Chung Hee is most evident in the lead-up to the national museum’s grand opening. Political factions and advocacy groups seem ready to pounce on seemingly any detail about the facility’s setup.

In a parliamentary audit last October, opposition lawmakers found that exhibits mention Syngman Rhee and Park Chung Hee 28 and 24 times, respectively, but there was not a single mention of liberal President Kim Dae-jung, who organized the historic 2000 summit with the North, receiving a Nobel Peace Prize. There was also no mention of President Roh Moo-hyun, who preceded Lee Myung-bak.

Critics also pointed out that Hall No. 3, dedicated to Park Chung Hee, took up far more space and had a higher budget than the others.

In response to the outcry that followed, museum officials altered their plans to focus more on events rather than specific politicians in an effort to avoid any appearance of bias.

“Hall No.3 is an area that shows Korea’s growth and advancement as it overcame adversity .?.?. It is not a place to show the achievements of a certain politician,” Director Kim Wang-sik insisted back in December.

But the criticism has not subsided, and if anything, has grown fiercer since the opening.

An alliance of over 400 liberal-minded civic groups called on the museum to close due to its historical distortions, and exclusion of academia and civic groups.

“There is not a single exhibit on the Inhyeokdang Incident, while there are 48 exhibits on the Saemaeul Movement,” said Do Jong-hwan, a liberal lawmaker, at the alliance’s press conference in December.

In the Inhyeokdang Incident, 25 pro-democracy activists were indicted during the Park dictatorship in 1975, while the Saemaeul Movement is the president’s iconic scheme designed to boost living standards in rural areas.

Civic groups supportive of the liberal Kim and Roh administrations are also furious. Those leaders proudly referred to their work as “revolutions,” but they have seemingly been overshadowed by the industrialization of years past.

Museum officials have been quick to answer to criticism, but action has been slow.

“We have formed a group of advisers, and they are in the process of evaluating the exhibits. Once they come up with proposals, we will review them,” Choi Hwan, one of the curators, told the Korea JoongAng Daily on Monday.

In the meantime, museumgoers are left with what many agree are inadequate and therefore misleading exhibits. 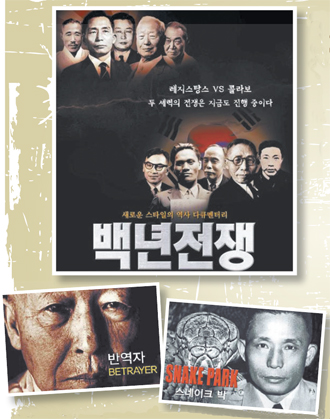 History “documentaries” created by a liberal group are making quite a buzz. They describe Syngman Rhee as a traitor and Park Chung Hee as a snake. Screen captures from YouTube

Koreans’ struggle to come to a middle ground on the interpretation of modern history is also evident in the video series “Hundred Years’ War in Korea,” which has attracted millions of views on YouTube.

The creation is actually a series of so-called “historical documentaries” covering events from the past 100 years ranging from Japanese colonization to the Lee Myung-bak administration, but the sponsor has some raising their eyebrows.

Minjok Munje Yeonguso (Korean Issues Research Center) was launched in 1999 to study modern and contemporary history, and its key mission was drawing up a list of Koreans who collaborated with the Japanese from 1910-45. The list is considered questionable by many.

So far, it has released two parts of the series: one called “Two Faces of Syngman Rhee” and the other on Park Chung Hee called “Fraser Report: Who Really Advanced Korea’s Economy?”

Critics strongly doubt the historical validity of the pieces due to their provocative visuals and words. At one point, Rhee was called a “Hawaiian gangster” and a “betrayer.”

Park is also the subject of unverified claims. The video claims that U.S. officials gave him the nickname “Snake Park” for his questionable character and tries to credit the John F. Kennedy administration in the United States with Korea’s economic development rather than Park’s plans.

On Sunday, a conservative civic group called Sidae Jeongsin (The Spirit of the Times) proposed a joint symposium with Minjok Munje Yeonguso to discuss its videos that “distort history.”

“?‘Hundred Years’ War in Korea’ is creating a sensation by seriously distorting the country’s history,” Sidae Jeongsin was quoted as saying by Yonhap News Agency. “It’s important to allow people to have access to accurate views of history through public discussion.”

“Historical matters directly related to the identity of the Korean people can no longer be handled by non-professionals and left to the realm of emotions,” it added. “Through in-depth discussions between professionals and intellectuals of both sides, the truth must be unveiled and shown to the people.”

Minjok Munje Yeonguso said it will “positively consider” the offer and in the meantime hold a press conference to refute Sidae Jeongsin’s claims.

President Park has so far stayed out of the dispute, though media reports said last month that “she will look into it” after being informed by Lee In-ho, chairperson of the Asan Institute for Policy Studies. 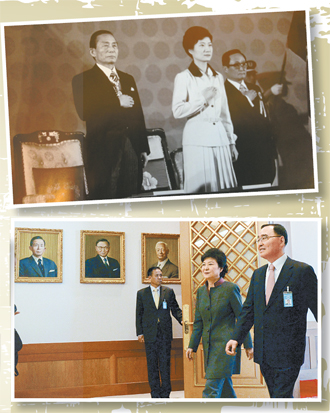 Koreans’ interest in modern history is higher than ever since Park Geun-hye, daughter of Park Chung Hee, became president. The top photo shows the two in the Park Chung Hee era, while the photo below shows the daughter passing by her father’s portrait in today’s Blue House. [JoongAng Ilbo]

The history of such publications has been riddled with disputes that have doomed many to failure.

In 1988, the National Institute of Korean History released a 783-page publication called “History of Korea,” which covered important issues starting from 1948, when the Republic of Korea was formally established. However, the text was compiled in just a year at the order of President Roh Tae-woo and was filled with discrepancies. For instance, one writer referred to the May 16, 1961 incident in which Park Chung Hee rose to power as a “revolution” while another called it “coup d’etat.”

In January, Yi Tae-jin, head of the National Institute of Korean History, resolved to rectify the problem with a surprise announcement about a 10-volume “History of Korea” to be printed by 2015. The announcement was criticized as a closer look revealed that many of the institute’s writers had leftist tendencies.

Some wrote an article denouncing the National Museum of Korean Contemporary Museum and also appeared in “Hundred Years’ War in Korea.”

Media lashed out by saying that “with stark differences in views on Korea’s modern history, it’s too premature to write a book with the name ‘History of Korea.’?”

A month later, the institute postponed the project indefinitely.

“Strong external pressure would prevent our members from revealing their true voices,” said Kim Hee-gon, head of the committee in charge of the project.


A call for action

In the midst, and perhaps because of the intense controversy, Koreans’ interest in modern history appears to be rising. Minjok Munje Yoenguso reported that 1,570 new members joined its organization in December, a stunning increase over the typical 30 or 40. And at bookstores, publications like “History of Korea” by Han Hong-gu and “Korea’s Modern History through Photographs and Drawings” soared 10 to 20 times after the presidential election.

Historians are happy with the uptick in interest, regardless of the cause, but say that it has increased the need for more sufficient study of modern history.

A common theme among complaints is a lack of independence for researchers subject to strong government pressure.

“Existing research on Korea’s modern history is lacking,” said Chong Jong-sup, a law professor at Seoul National University. “Writing about modern history is difficult because it’s tied to the interests of living people. Even researchers can lose objectivity and interpret history according to their preferences. So their work is much closer to a novel or even propaganda.”

Park Tae-gyun, a professor of international relations at Seoul National University, raised a similar point at a recent forum.

“History should be dealt with by an organization that is independent from politics. These are issues that need to be tackled even as the presidential administration changes,” Park said.

And as the president struggles to deal with issues dredged up by her predecessors and beyond, that’s a fact of which she is now well aware.