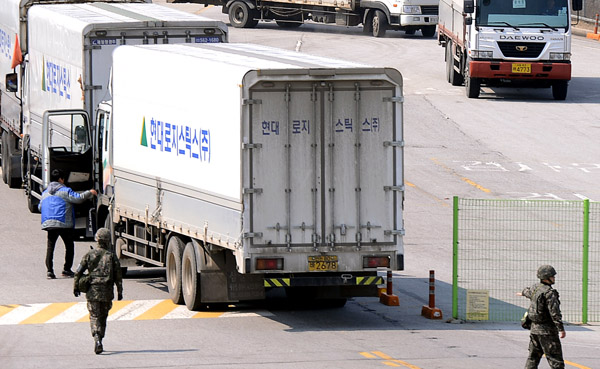 As North Korea blocked all workers and cargo from South Korea from crossing the border to enter the Kaesong Industrial Complex, trucks make u-turns at the gate of the South’s Customs, Immigration and Quarantine Office in Paju, northern Gyeonggi, yesterday. [NEWSIS]

Pyongyang blocked all workers and cargo from South Korea going into the Kaesong Industrial Complex following a warning March 30 that it could “ruthlessly” shut down the cross-border factory park.

The South’s Unification Ministry said yesterday Pyongyang sent a notification through the Kaesong Industrial District Management Committee, an inter-Korean organization in charge of the complex, that it will ban any access to the complex from the South and only approve the exit of workers and some vehicles.

“North Korea’s measure to block access to the complex today is creating a serious barrier to stable management of the Kaesong complex,” Kim Hyung-suk, spokesman of the ministry, said. “The government expresses strong regret over the measure and calls for immediate normalization of the complex.”

According to the ministry, a total of 484 Southern workers and businessmen were supposed to enter the complex and 446 were scheduled to leave.

All of the 484 South Korean workers, who were waiting for permission to pass through the Customs, Immigration and Quarantine Office (CIQ) in Paju, a border region in the South, were unable to cross the border.

The ministry said most of the 446 South Koreans who were supposed to return to the South yesterday decided to stay in the complex to keep operating it.

“At 11:50 a.m., three people and three vehicles returned to the South,” Spokesman Kim said. “At 2 p.m., an additional six people and four vehicles did. Today, a total of 36 people and 21 vehicles are planning to come back.

“Currently, the communication with the complex and the South Korean companies is being maintained,” Kim said. “We are closely mulling possible measures in response as well as checking the current situation in the complex.”

The ministry said a total of 828 South Koreans and seven foreigners stayed at the complex yesterday. The ministry said it will do everything to ensure the safety of the workers but concerns are growing about the possibility of them being taken hostage by the North in the midst of escalating tensions between the two Koreas.

According to the Unification Ministry, the complex is used by 123 South Korean companies and employs 54,234 workers, of which 53,448 are North Koreans and 786 are from the South.

Pyongyang warned March 30 it could “ruthlessly shut down” the complex as part of its protest of the ongoing Seoul-Washington joint military drills. That warning came after South Korean media reports said the impoverished regime would never abandon the inter-Korean industrial park because it provides about $80 million in U.S. dollars to North Korea annually.

Previously, South Korean businessmen running factories in the complex, mostly small- and medium-sized company owners, have asked the government not to create political tensions with North Korean that would lead to a shutdown of the park.

Unification Ministry Spokesman Kim said if access restrictions continue, it would disrupt the operation of the entire complex.

“If the North continues to refuse any entrance into the complex, it would disrupt supplies of raw materials and hinder operations of the complex,” Kim said.

Defense Minister Kim Kwan-jin warned that a “military measure” is possible if the safety of South Korean workers in the complex is threatened.

“We need to prevent the situation at the Kaesong Industrial Complex from becoming a worst-case scenario,” Kim said at a meeting with ruling Saenuri Party lawmakers yesterday. “The Defense Ministry is making the safety of our people a top priority and we also have arranged some plans including military measures in case of a possible incident.”

Still, Kim said the government is not considering shutting the complex, the last remaining example of inter-Korean cooperation from the Sunshine Policy days.

It is not the first time that Pyongyang disrupted the operation of the complex.

In December 2008, the North restricted South Korean workers’ access to the complex for 12 days because it was upset by leaflets critical of the regime sent into its territory.

In March 2009, the North cut off military channels with Seoul for 12 days to denounce the Korea-U.S. joint military drill Key Resolve. It also restricted access to Kaesong for three days.

After the shelling of Yeonpyeong Island in November 2010, the North blocked access to the complex for 27 days.