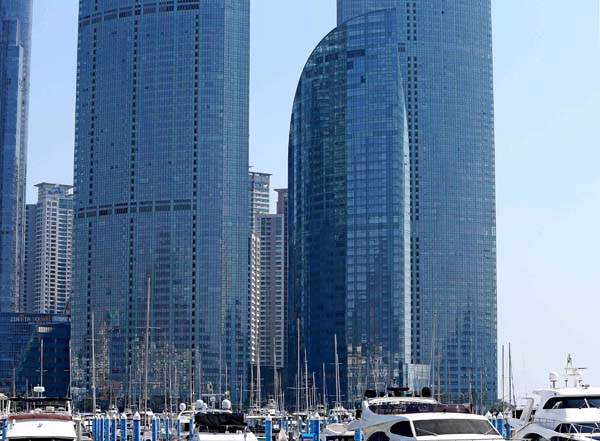 The newly opened Park Hyatt Busan hotel, right, stands just 20 meters (66 feet) away from the Hyundai I-Park apartment building in the Haeundae District of Busan. A group of 13 I-Park residents filed a suit against the builder for privacy violations. By Song Bong-geun

BUSAN - At Hyundai I-Park, a 72-story luxury apartment building in Wu-dong, Haeundae District, known as the port city’s most prosperous area, strange signs are seen in the windows of some units.

One of the signs in the window of an apartment on the 36th floor reads, “No SEX!” and “I can even see you peeing!”

In another, mannequins clad in only lingerie hold up their own signs, to point out the visibility of people in the apartments.

“When the hotel turns on their lights in the evening, a live sex show begins every day,” Kim, 51, a resident on the 36th floor complained.

“We see naked people kissing and having sex on their bed or sofa. I have a daughter who is in the 12th grade and preparing for the CSAT [college scholastic ability test], so I don’t want to let her see this.”

The residents said that they have installed shades and curtains, but it can’t be an ultimate solution because they can’t cover every space and they want to enjoy the beautiful views and sunlight from the Haeundae Beach scene.

The awkward situation began when the brand new six-star, 33-story Park Hyatt Busan hotel opened next to the apartments on Feb. 18.

The distance between the two buildings is only about 20 meters (65 feet). 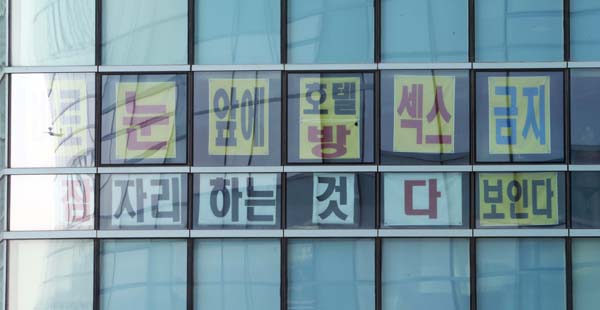 Signs reading “I can see you having sex in the hotel room” hang in the windows of Hyundai I-Park. By Song Bong-geun

The problem is that the exterior walls of the two buildings are covered with large glass windows.

The living rooms of the buildings face each other, so that apartment residents living on the 30th to the 40th floors and hotel guests on the 28th to the 33rd floors are able to see directly into each other’s rooms.

“Some hotel guests even wave at us,” Kwon, 42, a resident said. “It feels terrible because it feels like our privacy has been violated by strangers.”

Thirteen of the residents with the most to complain about decided to lodge a compensation claim against the builder with the Busan District Court.

The residents stated that the builder never explained that they will build a hotel in front of their home when the builder sold the apartments, thus their view and privacy have been violated by the hotel that was built too close to their home.

“The builder must do something like tint our windows so people can’t look into our rooms from the outside,” a resident who posted a “What are you looking at?” sign on his window said.

“The apartment building is located within a commercial area which can house many types of businesses, including hotels,” said Ha Seong-tae, an official of the housing and architecture division of the Busan city government.