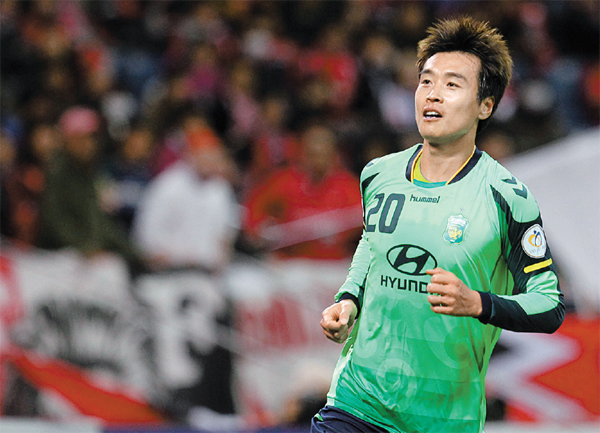 Jeonbuk Motors striker Lee Dong-gook runs around the pitch after scoring against the Urawa Red Diamonds on Wednesday at Saitama Stadium in Saitama, Japan. Lee also set up the other two goals in the Motors’ 3-1 victory. By Kim Jin-kyung

The Jeonbuk Motors filed a protest with the Urawa Red Diamonds for a display of the rising sun flag by the Japanese crowd during Wednesday’s game between the two clubs at the Saitama Stadium in Saitama, Japan.

According to Motors officials, some Japanese supporters showed the military flag, a bitter reminder of Japan’s 1910-45 colonial rule of Korea, in several places in the stands during the Asian Football Confederation Champions League group stage game between the Korean club and the Japanese club.

Jeonbuk officials said that Urawa officials had agreed a day earlier that it would ban the flag from being carried into the stadium.

The flag, with its distinctive sun rays image, is still used by the Japanese Self-Defense Forces and is considered offensive to its neighboring Asian countries such as Korea and China due to Japan’s wartime aggression in the region in the first half of the 20th century.

The flag’s use by Japanese teams or Japanese fans during international sports events has frequently caused controversy in Korea such as during the 2012 London Olympics, when Japanese gymnasts wore uniforms emblazoned with a modified ?design.

Aware of its sensitivity, the Japan Football Association had banned the display of the flag during international football competitions held in Japan. But it lifted the ban during the FIFA U-20 Women’s World Cup last summer and some Japanese supporters displayed it during a quarterfinal match between Korea and Japan in Tokyo on Aug. 30.

Korea’s Park Jong-woo was withheld from receiving a bronze medal after his act on the football pitch during the 2012 London Olympics was seen by some as a political expression. The Korean midfielder held up a “Dokdo is our land” sign, referring to the Korea’s easternmost islets claimed by Japan, after Korea beat Japan 2-0 in football’s bronze medal decider. He later received the bronze medal as his act was ruled as unintentional.

The second leg match between the two clubs will be held at the Jeonju World Cup Stadium in Korea on? Tuesday. Jeonbuk officials said they told the Urawa officials that they will ban Urawa fans from bringing the rising sun flag into the Jeonju stadium.

Apart from the display of the rising sun flag, some Japanese fans during the Wednesday’s game even sprinkled water onto the Korean supporters flown from Korea and showed their middle fingers to them, the Motors officials said. About 22,000 people visited the stadium for the game, according to K-League officials.

“We secured the photos of the Urawa fans who made threatening behaviors and delivered the photos to Urawa,” a Jeonbuk official said. “We received a promise that they will try to prevent a recurrence.” Meanwhile, Lee Dong-gook scored a goal and set up two others as the Jeonbuk Motors came from behind to beat Urawa, 3-1.

The 64th-minute goal was his 19th career goal in ACL campaigns, making him the leader in the most goals category. Before the game, he shared the lead with Leandro of Gamba Osaka at 18 goals.

Lee also set up for Lee Seung-ki in the 51st minute and Enio Oliveira Junior in the 70th minute. Urawa’s Genki Haraguchi scored the hosts’ only goal in the seventh minute.

In Group F, Jeonbuk is now in second place with five points, two points behind Guangzhou Evergrande of China, who beat the Muangthong United of Thailand 4-0 at home on Wednesday.