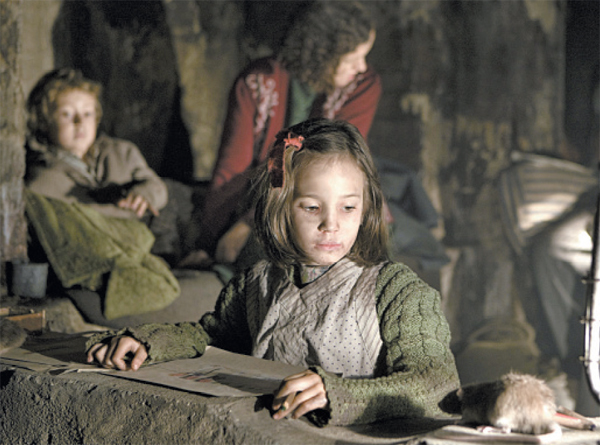 A young girl struggles to survive in the sewer in a scene from “In Darkness,” a new film about the Holocaust. Provided by Mountain Pictures

In a post “Schindler’s List” (2003) world, you have to be really ambitious or thick-skinned to take on a film focusing on the plight of Jews during World War II.

And it seems that famed Polish director Agnieszka Holland was both when she released her portrayal from across the German border through “In Darkness.”

Set against the backdrop of Nazi-occupied Lwow in Poland, the director takes viewers on a hellish ride accompanied by a group of 11 Jews, children and a pregnant lady included, who struggle amidst the feces, rats and corpses for more than a year.

The screenplay is an adaptation of the book “In the Sewers of Lvov” by Robert Marshall, also inspired by true events.

Although scenes depicting concentration camps are kept to a minimum, the 144-minute film has much the same effect as the countless other flicks that have chosen the historical period as a theme.

The audience is spared nothing when a Nazi officer rips off a prisoner’s beard with bits of skin attached or people engage in sexual romps that take place even in the sewers.

When the film was released in Europe and the United States in September 2011, it was met with mixed reviews.

Critics compared it to Steven Spielberg’s “Schindler’s List,” and many claimed that “In Darkness” was the less gripping movie of the two.

Nevertheless, the European take is very different from the American production; there is no glimmer of hope, nothing like the little girl in red that weaves in and out of the narrative to boost morale even just slightly.

For Korean viewers, the film will be worth checking out for parallels to another history-based film, “Jiseul” (2012), which is screening at the moment.

“Jiseul,” which means potatoes in the Jeju dialect, centers on a group of residents who seek refuge inside a cave in the mountains during the late 1940s when a group of Army officers go on a mission to execute all potential communist sympathizers.

The plight is told in black and white and inspires feelings similar to those in Holland’s piece.

Despite the obvious contrast in scenery, language and setting, there is an immediate parallel as characters come to rely on one another in a confined space.

Through the two films, human compassion and brutality come to the forefront in both East and West.

And as plots centered on human suffering often do, the films leave viewers thinking that despite the differing time periods and locales, themes like abuse of power and sense of justice even when out of reach are universal.