Performance groups at the National Theater of Korea are staging a musical, dance performance and even a changgeuk (Korean traditional opera) for children and families. Provided by the organizers

Across Seoul, performance groups are shifting their focus to an oft-neglected group - children - in hopes of enlarging their viewership and addressing social issues relevant to the younger generation.

In “A Shuttle Boy Wearing Red Shoes,” the National Dance Company aims to address the always-serious issue of school bullying through performance. The title is derived from a Korean term that roughly translates as “bread shuttle.” It describes students forced to run errands for bullies. A common task for a shuttle boy or girl is running to the nearest store to buy bread or other snacks.

It is the company’s first production aimed at youth and will address bullying via characters from famed storybooks by Hans Christian Andersen. Organizers said they aim to mimic the author’s style by creating their show as if Andersen had actually written a book about bullying and drawing inspiration from his life.

“Andersen’s storybooks embody his ‘crooked personality’ hidden in veil. Despite being raised in a poor family where his father worked as a cobbler, Andersen lived a success-oriented life and managed to enter high society. However, he always felt like the ‘ugly duckling’ as well, and these mixtures of emotions are seen in his stories. Therefore, Andersen’s stories not only teach moral lessons but also include social aspects,” the company said.

“A Shuttle Boy Wearing Red Shoes” includes Andersen’s fairy tales such as “The Red Shoes,” which centers around a peasant girl named Karen who had her feet chopped off due to vanity and greed, “The Little Mermaid,” who throws herself into the sea to escape her tragic reality, and “The Little Match Girl,” who dies due to people’s apathy. 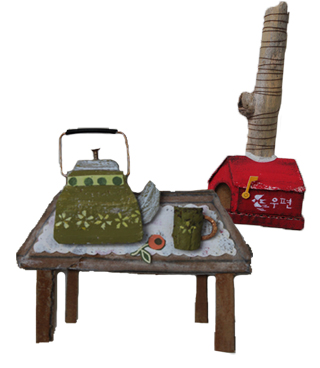 Drawings that will be used in “Doodi, The Mole Underground”

These characters, according to the organizers, resemble children of the 21st century who are treated as outcasts and unable to free themselves from social pressure.

The National Orchestra is also presenting a performance aimed at children and families.

“Children and teenagers these days rarely have the opportunity to listen to live orchestra music. Instead, they are often seen with headphones stuck in their ears listening to recorded music,” said an official from the orchestra, which will be staging “Doodi, The Mole Underground” specially for younger audiences. In the background, it will also show drawings by the best-selling picture book illustrator Lee Yeon-sil.

“Even in kindergarten, not to mention elementary schools, children hardly listen to live tunes from a piano or organ. They learn music through computers and listen to ‘instant music’ through their MP3 players or smartphones,” the orchestra said. “This concert doesn’t aim to pressure children with artificial didactic but only tries to provide children with beautiful melodies of live music while telling a story of a mole named Doodi who adventures out to the world.”

The National Changgeuk Company is also jumping on the bandwagon with a traditional opera (changgeuk) based on the controversial film “Like A Virgin” about a little boy who wishes to become a woman.

“My Name is Oh Dong-gu” is part of the company’s “Youth Changgeuk Series,” begun in 2000 in an attempt to “nurture future audiences for changgeuk.”

Nam In-woo, considered a leading figure in pansori (narrative singing) performances and children’s plays, decided to direct this performance. He is also the creator of “Ukchukga” and “Sacheon-ga,” which have become iconic pieces for pansori singer Lee Ja-ram.

“Although the subject - dealing with a boy who wants to become a woman - is unprecedented in changgeuk, Nam and the members of the National Changgeuk Company have been working hard to come up with a performance that will appeal to children and families,” said an official from the company.