Sure, you’ve got talent, but do you have success?

Sure, you’ve got talent, but do you have success? 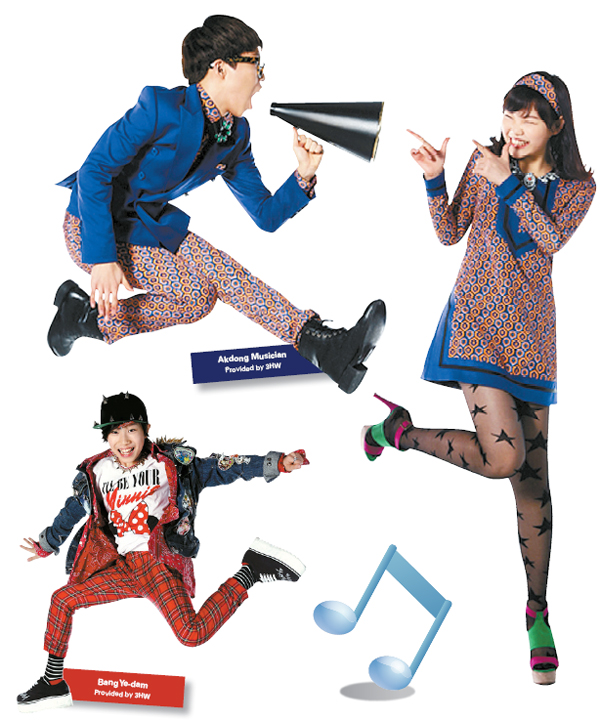 From the top,Akdong Musician and Bang Ye-dam. Provided by 3HW

People who haven’t watched recent episodes of the SBS survival audition show “K-Pop Star” may have been curious about why the name of a new group, Akdong Musician, was so high on local music charts.

Weeks before the program decides a winner, the brother and sister duo Lee Chan-hyuk and Lee Soo-hyun swept the charts with songs they composed and wrote lyrics for. They also composed background songs for recent commercials for KT, the nation’s second-largest mobile network carrier, and appeared in it as singing models.

However, questions have risen about whether the duo’s good work will continue after the end of the program Sunday because they have been incubated under the image-making strategies of local TV networks and haven’t experienced the reality of the entertainment industry.

Since cable channel Mnet introduced Korea’s own version of the survival audition program, “Super Star K,” in 2009, Korean TV networks have spawned numerous similar shows. Although many talented performers were found during the show’s run, there hasn’t been much information about how many of those performers pursue entertainment careers after the show ended.
Hence, JoongAng Ilbo, an affiliate of the Korea JoongAng Daily, requested an analysis on the performance of the 29 audition contestants who became famous to digitize the impact of audition programs on the local entertainment scene. The first-ever report on the issues by the Korea Music Content Industry Association is based on the ranking of songs released after the program’s run from 2009 to 2012. 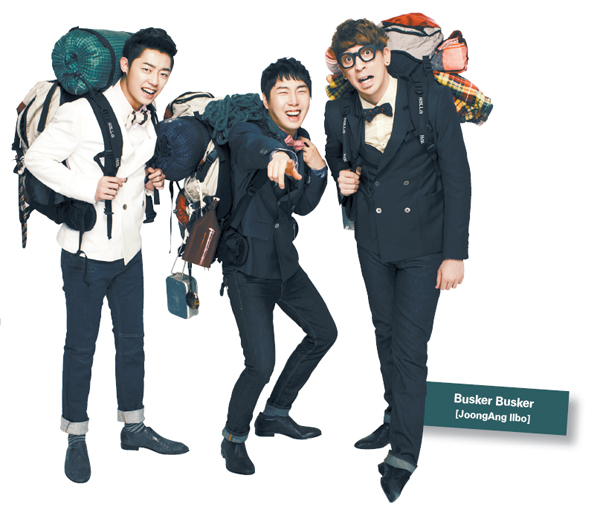 Seventeen contestants have put at least one song on a top 400 yearly list on Gaon Chart, the official music chart sponsored by the Ministry of Culture, Sports and Tourism. The rankings on the list are calculated based on downloads or streaming of the songs to the nation’s multiple music Web sites, and the use of cell phone ringtones.

“[When a song] landed on 50th place on the yearly Gaon Chart, that means that it was a hit song,” said senior fellow researcher Kim Jin-woo at the Korea Music Content Industry Association.

“A song that landed near 400th place means that it quickly rose to top popularity in one week and then completely disappeared from the scene.”

Among all the contestants, songs from 12 teams failed to make the top 400 list.

Busker Busker, the semi-finalist in the third edition of “Super Star K” in 2011, who drew the most attention from the public, was considered the biggest beneficiary of the program. Since the show went off the air, all 17 songs they released landed on the top 400 list. 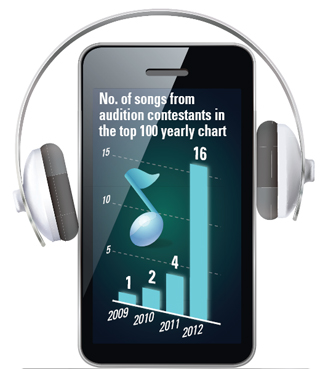 The three-member group even created an unseen trend recently. Its “Cherry Blossom Ending,” released last year, came back and swept the local music chart since late last month. It was the first time in the Korean music history that an “old” song was ranked top in the daily chart.

Many industry experts speculated that because the song mentions seasonal cherry blossoms, it has made people reminisce about this time last year, or the song itself is of great quality.

“It’s just phenomenal and an unexplainable trend,” said Kim Ki-woong, chief producer at Mnet’s Super Star K series. “They pursued their style of music and that created a hot issue.”

Due to its long history, the cable network program has spawned the most number of post-audition contestants that stand out in the music scene. After Busker Busker, the winner of the same program, Huh Gak, showed the second-best performance, as 12 of his songs placed in the top 400 chart, including his first EP, “Always.” The winner of the first season of “Super Star K” in 2009, Seo In-guk, continued the good run by putting the soundtrack “All For You” in the cable network tvN drama “Respond 1997,” and placing eight other songs on the top list.

Lee Hi, a semi-finalist of another audition program, SBS “K-Pop Star” in 2011, joined the club last year with her debut song “1, 2, 3, 4.” She also booked a performance on superstar Psy’s concert on April 13 as a special guest. 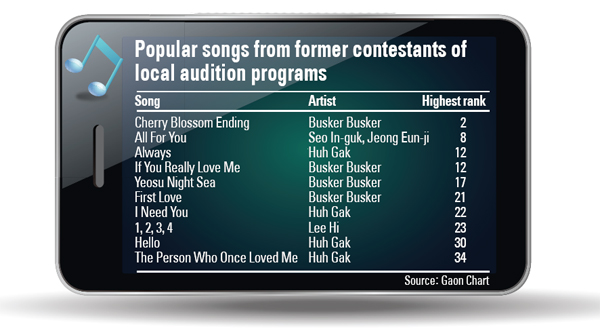 It is said that audition contestants have had advantages in garnering public attention as they were already exposed in the media throughout the programs. The public who witnessed their development wants to know how things turn out for them in the real world.

Audition stars have a much bigger role in the entertainment industry than ever before. While only two songs from audition contestants made the yearly top 400 list on Gaon Chart in 2009, the number jumped to 38 in 2012. The number of songs excluded pieces they performed during the audition, which originally granted them stardom.

Another factor to decide who will continue making appearances in the real world is the viewership rate of the program they were on. In a program that showed a relatively lower audience rate, MBC “The Great Birth,” only one contestant, Baek Chung-kang, made the top list. Other vocal talent audition shows, including Voice Korea on Mnet, have not placed any of their contestants on the list.

This is partly because the contestants’ TV appearances were more limited than other singers, although this trend has disappeared recently. Each TV channel had not allowed former contestants of other networks’ audition programs to perform in their shows so they could focus on their own contestants. 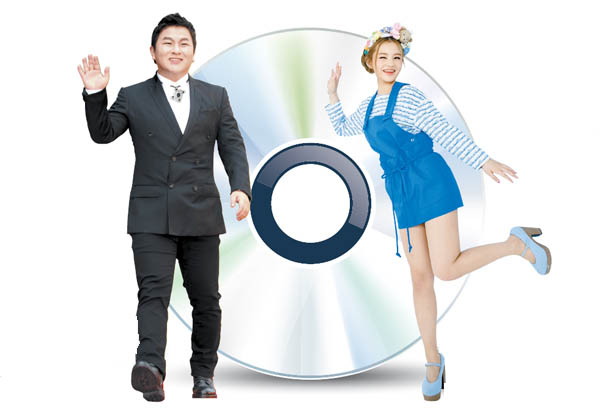 Meanwhile, among those who made good runs on the shows, the ranking and popularity of the audition has not transferred to success in real life.

John Park, who reached greater stardom than the winner, Huh Gak, in the first edition of “Super Star K” only landed in 72nd place with his song, “Falling.”

The winner of the third edition of “Super Star K,” Ulala Session, only has three songs, including “A Beautiful Night” on the top 400 list, while the semi-finalist Busker Busker has 17.

As these stars have less experience and knowledge in the local entertainment industry, their success comes from whoever directs them in their pursuit of a music career.

“Huh Gak survived as he worked together with some well-known composers and Lee Hi was well-managed by a large-sized agency,” said music critic Lee Dae-hwa.

“Others show some great differences in performance after their debut as many of them are singer-songwriters.”

Despite the fact that auditions have found talented performers, many industry experts worry that such audition programs will struggle and might be cancelled. The viewership rate is decreasing because audiences are getting tired of watching the similar contest format.

MBC announced it had no plan to continue the runs of “The Great Birth” after the viewership rate dropped to less than 7 percent in the third season, compared with more than 20 percent in the first season. The audition program forerunner Mnet was rumored to have considered cancelling its “Super Star K” as well in an attempt to leave the scene with grace while it is still popular.

“It’s too soon to tell if the program is a success only after five years because it takes much more time to make the program a long-running show just like “National Singing Contest,” said Kim, chief producer at Mnet’s Super Star K series.

He added that he thinks the show will continue making seasons six, seven and more. “National Singing Contest” has been running in Korea since 1980.

“Our goal is not just about finding stars, but about helping more people make a financially stable life from pursuing careers in music.”

He also downplayed worries about the demise of such programs due to low viewership rates.

“Many people now watch programs on TV through Web sites or other ways, so we don’t think that the rate is a great indication to decide whether certain programs can have a good run or not,” Kim said.

“We will have new generation auditioning for the program, so we are not worrying about having fewer contestants either.”