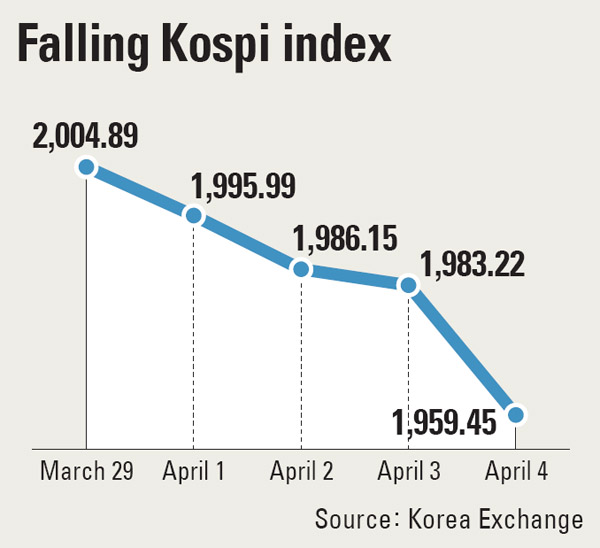 Growing tension over daily war threats from North Korea is weighing on markets and the economy, which was already struggling with anemic growth and mounting household debt.

Yesterday, the benchmark Kospi closed at 1,959.45, dropping 1.2 percent from the previous day. In the morning, the index plunged to 1,938.89 as foreign investors sold shares, seemingly spooked by growing geopolitical risks. Within 40 minutes of opening yesterday, foreign investors sold a net 70 billion won worth ($62.3 million) of Korean shares.

“In the morning, rumors spread that North Korea would be shutting down the Kaesong Industrial Complex and that was reflected on the local stock market,” said Oh Sung-jin, head of research at Hyundai Research Institute. “In the afternoon, the rumors turned out to be false and the Kospi gained a little. But foreign investors have been selling large chunks of their shares.”

Analysts are predicting that the so-called North Korea risk will affect the economy worse than in past periods of tension because the South Korean economy is weak and vulnerable. When North Korea sunk the Cheonan warship in March 2010 and shelled Yeonpyeong Island eight months later, the impact on the local stock market was limited. When Kim Jong-il died in December 2011, the Kospi fell more than 3 percent but started to recover after three days.

“There are many elements that are bound to limit the Kospi from rising, especially in the second quarter,” said Cho Yun-nam from Daishin Securities.

In addition to the North Korea risk, Cho said disappointing economic figures from the United States will weigh it down. The U.S.-based Institute for Supply Management announced that the index of non-manufacturing activity reached its lowest level in seven months in March.

To better cope with the North Korea risk, the Ministry of Strategy and Finance said yesterday it will hold a meeting this morning with officials from the Financial Services Commission, the Bank of Korea and the Financial Supervisory Service to check on the domestic financial markets and discuss pre-emptive measures.

“North Korea is continually making provocative threats,” said an official from the Finance Ministry. “The meeting will be to review the overall market situation and discuss what measures can be made to restrict any impact.”