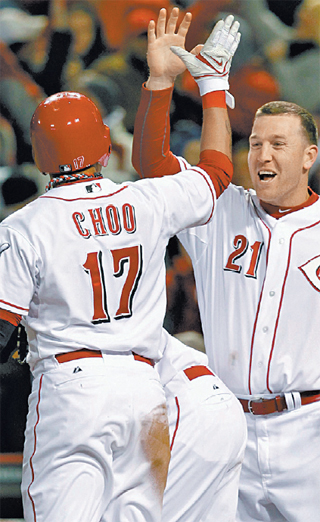 CINCINNATI - Joey Votto’s first hit of the season wasn’t all that pretty, but the timing and placement were perfect.

Votto’s hard grounder deflected off the glove of first baseman Albert Pujols and drove in the winning run in the bottom of the ninth inning Wednesday night, sending the Cincinnati Reds to a 5-4 victory over the Los Angeles Angels.

Brandon Phillips hit a three-run homer in his new role as Cincinnati’s cleanup hitter, and Votto provided the clincher with his first hit after an 0-for-6 start to the season.

“It’s important to get that first win and get the winning going,” Votto said.

His game-winning hit left the teams even heading into the finale of the first interleague series to start a season. The Angels won the opener 3-1 in 13 innings.

“I loved the way we played on opening day,” Phillips said. “This team never gives up. Everybody picks each other up. We stayed in the game and got it done.”

Left-hander Scott Downs (0-1) came on to start the ninth and hit Choo Shin-soo with his first pitch. After a sacrifice, Votto hit his grounder to Pujols’ right. The ball deflected off his glove and rolled into the outfield, allowing Choo to score easily.

“It was a tough play,” Angels manager Mike Scioscia said. “Albert’s a terrific defensive player. It was hit pretty hard. It just got by him.”

Phillips moved into the cleanup spot because of Ryan Ludwick’s injury and hit the Reds’ first homer of the season. He connected for a three-run shot against C.J. Wilson in the fourth inning, when Cincinnati sent nine batters to the plate for four runs.

Left-hander Aroldis Chapman (1-0) walked one in the ninth, throwing a 99 mph pitch that hit the backstop screen.

Mat Latos, who took the loss in the deciding Game 5 of Cincinnati’s playoff series against San Francisco last season, left with a 4-3 lead in the seventh. He gave up a solo homer by Howie Kendrick, and a two-run shot by Alberto Callaspo on his 100th and final pitch.

The Angels tied it with the help of third baseman Todd Frazier’s error in the eighth, pulling even on Mark Trumbo’s run-scoring groundout.

The Reds had to juggle their lineup for the second game of the season, and it’s not going back anytime soon.

Ludwick had surgery on Wednesday to repair torn cartilage in his right shoulder, injured on a slide on opening day. He’s expected to miss at least three months.

The new lineup had one very good inning.

Heisey walked in the fourth inning, and so did Votto. Phillips, who flied out to the warning track in his first at-bat, then homered for a 3-0 lead. It was a breakthrough for the Reds, who managed only three hits and one run - on a wild pitch - during the opening day loss.

“It wasn’t a good pitch at all,” Wilson said. “It’s not like it was up and in. It was a cutter that cut right into his swing, right into his happy zone.”

Jay Bruce followed with a double and scored on Frazier’s single.

Latos was on his game at the outset, fanning seven in the first five innings. Once again, the bottom of the Angels’ order produced the most.

The Angels’ power hitters have failed to connect. Pujols is 0 for 7 with two strikeouts. Josh Hamilton - signed for $125 million in the offseason - is 0 for 8 with three strikeouts. Trumbo has? a pair of singles and has fanned four times. AP