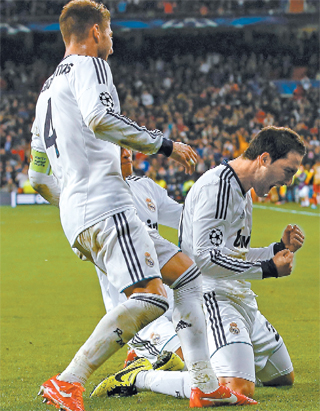 MADRID - Cristiano Ronaldo opened the scoring after just nine minutes as Real Madrid swept to a convincing 3-0 victory over Galatasaray in the first leg of their Champions League quarterfinal on Wednesday.

Ronaldo’s delicate chip shot was followed 20 minutes later by a close-range strike from Karim Benzema as a dominant Madrid moved effortlessly through the gears.

Gonzalo Higuain came on for Benzema in the 65th and headed home Madrid’s third goal eight minutes later, leaving Galatasaray with a near-impossible task in Tuesday’s second leg in Istanbul to reach the semifinals.

“The team has played a good match, it was serious and balanced, they were aware that this competition can be decided on mere details,’’ Madrid coach Jose Mourinho said. “Real Madrid has played a great match and deserved to win.’’

However, Mourinho added that he would try to get the message across to his players that the return leg would be a tough one.

“If we score a goal, they will have to score five. But in football I have seen so many incredible things, nothing can surprise me,” said the Portuguese coach, who is hoping to win the Champions League with a third club after his earlier successes with Porto and Inter Milan.

“Istanbul is a very difficult place to play, they will fight very hard against us. The story of football is full of miracles and I will try and convince my players that it’s not all over yet.”

It was a view shared by Galatasaray coach Fatih Terim, whose side will at least be able to count on vocal support in the second leg.

“Of course 3-0 is a bad result,” he said. “The referee did not dare give a couple of penalties against us. We had our chances too, but we failed to convert them .?.?. We will return to Istanbul and try to do our utmost for our fans there.”

Ronaldo set the early tone with an exquisite piece of skill, running on to Mesut Oezil’s defense-splitting pass before lifting the ball over goalkeeper Fernando Muslera and into the far corner of the net.

Since his arrival at Madrid, the German midfielder has supplied Ronaldo with 25 goal-scoring assists.

Didier Drogba could have equalized for the visitors in the 12th after controlling the ball on the edge of the penalty area, but his shot flew high. Three minutes later, Wesley Sneijder’s effort also sailed over the Madrid crossbar in one of the visitors’ best periods of the game.

Muslera was forced to make a good, low save in the 18th minute from a shot by Oezil before Madrid made its superiority count for a second time.

Benzema was picked out by a long cross from the right by Michael Essien and the France international was allowed just enough time to unleash a low, right-foot shot inside Muslera’s near post.

Madrid continued to the control game in the second half, while Galatsaray had very little to show for its efforts and lacked any real bit in the final third.

Angel Di Maria had a shot at close range, but the ball was held by Muslera in the 62nd.

However, there was nothing the Galatasaray keeper could do in the 73rd minute when Higuain rose to meet a free kick by Xabi Alonso and sent a glancing header into the corner of the net.

“We have the result we wanted, which was not to concede goals,” Alonso said.

But he added: “We should not take anything for granted.”

In Wednesday’s other quarterfinal, first leg match, Malaga held Borussia Dortmund to a 0-0 draw in Spain.