Hyundai Motor Group’s bid to raise its brand value has suffered a huge setback with the automaker’s largest-ever recall in the United States and the prospect of additional recalls in other countries.

According to the filings posted on the National Highway Traffic Safety Administration Web site Wednesday night, local time, Hyundai said it will recall nearly 1.06 million cars for malfunctioning stop lamp switches, while Kia will recall 623,658 units for the same problem.

Meanwhile, Hyundai and Kia said yesterday that 160,000 vehicles will be recalled in Korea. They include about 110,000 units of the following Hyundai models: the 2009-10 Avante (known as Elantra overseas), the 2010-11 Santa Fe and the Veracruz, which was produced from August 2008 to last November. Kia will recall the 2010 Carens (known as Rondo in the United States), and the 2010-11 Sorento and Soul. Fifty thousand cars are affected. 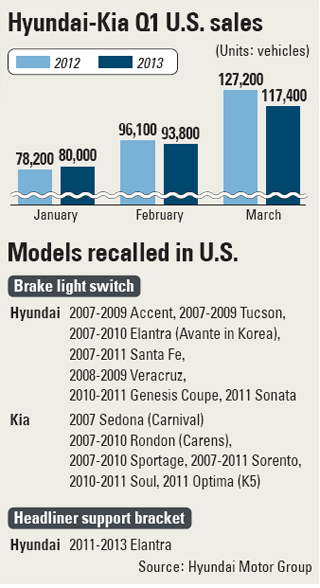 According to the U.S. NHTSA, a malfunctioning stop lamp switch could cause brake lights and cruise control deactivation to fail when the pedal is depressed.

In addition, it may also cause “intermittent operation of the push-button start feature and affect the operation of the brake-transmission shift interlock feature, preventing the shifter from being moved out of the park position and causing the electronic stability control [ESC] malfunction light to illuminate,” the NHTSA said. The agency added that the consequences of these potential problems could “increase the risk of a crash.”

In the United States, Hyundai and Kia will notify owners and dealers to replace the brake light switches free of charge. Kia will send out notifications in May and Hyundai in June, after enough replacement parts are secured.

Hyundai also said it is recalling 186,254 Elantras built from Nov. 12, 2010, through March 5 because a support bracket attached to the car’s ceiling, or headliner, may be displaced during side curtain airbag deployment and cause a laceration injury to passengers.

For this problem, Hyundai dealers in the United States will install industrial adhesive strips to keep the brackets in place at no cost. The automaker will notify owners in May.

In 2009, Hyundai issued a recall for the same problem. The automaker says it made changes to its production process since the 2009 recall to address the problem, but the cars included in Wednesday’s recall were made before all changes were instituted.

Industry observers said the massive U.S. recall was not unexpected because there have been reports of faulty brake light switches and side curtain airbag problems in other countries earlier. 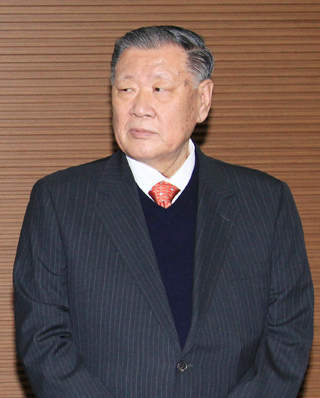 According to the Detroit News, this new recall was driven by an investigation by Transport Canada. The Canadian auto safety regulator notified Hyundai in November after it received nine complaints involving models outside the production range of its 2009 recall.

Brake light switch complaints were also made in Australia, where Hyundai said last month it would voluntarily recall 227,000 vehicles.

The NHTSA started its investigation of the side curtain airbag problem last May after an Elantra owner reported to authorities that a bag inflated in a crash and a metal bracket sliced the driver’s ear. Since that time, the U.S. agency investigated 123,000 2012 Elantras.

In recent years, Hyundai has had frequent recalls for technical problems in the United States.

Last July, the automaker recalled 220,000 units of the 2007-09 Santa Fe and the 2012-13 Sonata for airbag issues: the Santa Fe for a faulty occupant classification system (OCS) and the Sonata for a side curtain airbag deployment problem.

In December, 13,500 units of the 2012 Hyundai Veloster after a panoramic sunroof shattered.

Making things worse, the NHTSA on Tuesday said it has opened an investigation into 2006-08 Sonatas after receiving six complaints involving failure of rear suspension control arms caused by corrosion. The agency estimated 393,000 units may be affected.

The recall in the United States will likely spur recalls in other countries. It is unclear how many vehicles might be involved since regulations and model specifications differ by region.

“We can’t exactly tell how many vehicles will be recalled in the world, but we are asking each of our overseas branches to determine if there are any problems,” said a Hyundai official.

Local analysts said the recall will affect the automaker’s sales and share price, but the impact will be limited.

“So far, no fatal accidents have been reported, unlike what we heard from the massive Toyota recall in 2009-10, and the fact that the company is voluntarily recalling the vehicles, I think the impact will be more or less the same as after the fuel efficiency issue last year,” said Chang Moon-su, an analyst at Eugene Investment & Securities. “In addition, the cost of repairs is expected to be small compared to other recalls.”

However, Chang expects Hyundai to steadily lose share value as the automaker lacks new models and adequate supplies. Hyundai and Kia’s combined U.S. sales in the first quarter of this year were 291,262 units, a 3 percent decrease from a year ago.

Other industry observers point out Hyundai’s biggest concern will be damage to its brand value.

Hyundai Motor Group Chairman Chung Mong-koo emphasized in his New Year’s speech that in 2013 the company was geared toward strengthening its brand.

It has been trying hard to convey a premium image in the United States lately, introducing luxury models like Equus and Genesis, but the business plan may come down to where it all started: quality.

“There could be a possibility that the U.S. auto industry’s intention is to contain Hyundai’s rise in their market, but no matter what, the scale of recall is big and some issues are also related with safety,” said Kim Pil-soo, an automotive studies professor at Daelim University College. “What’s sure for Hyundai is that this incident will make the company focus more on product quality and evaluation.”